He was one round away from being the ADAC Formel Masters champion in 2012 and is one of the most promising Scandinavian drivers on the horizon. As Gustav Malja, 17, makes his first steps in FR 2.0, we chat to the Swedish talent?

– Now, obviously, you’re coming from ADAC Formel Masters, where you spent two years of your career. Since you’re now in the Eurocup Formula Renault, higher up the ladder, and you get to reflect a bit, what do you think now about the series and the time you spent in it?

– I think ADAC Formel Masters is a great championship, definitely. Maybe not really suited for going into Formula Renault. The good thing is it has so many races ? I’ve done 47 in only two years, that’s a lot… and lots of testing as well. We learn everything, all the basics and it’s good competition. And, of course, my season last year was very good, I felt. I was consistent, pulled off many cool laps and good races.

– As most drivers in the European junior single-seaters, your main goal is F1?

– If that doesn’t pan out, would you be willing to consider other championships like DTM, STCC, IndyCar and the like? Or, perhaps, is it F1 or nothing?

– Well, if the chance to go to F1 is at all still there and I have to do another series like DTM and IndyCar, I’d obviously go for that. My goal has always been to get to F1, I have been dreaming about it ever since I’ve been a little kid. I can’t really imagine it otherwise at the moment. 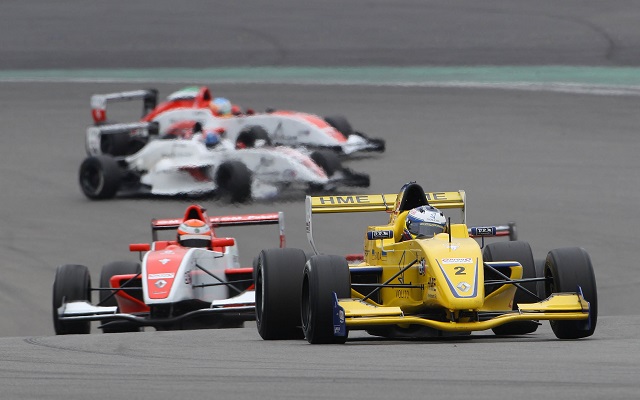 ?? Gustav makes his way to a career-first podium in FR 2.0 NEC at Nurburgring (Photo: Chris Schotanus)??

– There are currently no Swedes on the F1 grid, which is surprising, given your country’s rich history in motorsports. You’d like to be there yourself but, asides from that, who are your compatriots you would think are the most promising drivers in the ladder?

– Well, there aren’t really a lot of Swedes driving in European single-seaters. It’s me, Marcus Ericsson in GP2, Jimmy Eriksson in GP3, my good friend Felix (Rosenqvist) in European F3 and John Bryant-Meisner in German F3 and obviously some other drivers as well. I’d say Felix is the one who has a good chance to go to F1 because he’s a really good driver… and, of course, Marcus is a very talented driver, he made it to GP2 and not everyone manages that. Marcus is very close, but I think Felix has a better chance because Marcus has lost a bit of momentum, he’s been in GP2 for a lot of years now…

– And he really hasn’t had much luck this year, has he?

Exactly, so, I’d say Felix has the best chance of those listed… John has a rather good shot as well.

– As for your current season in the Eurocup and your appearances in Formula Renault 2.0 NEC, has this season lived up to your expectations so far?

– I knew it was going to be tough, good competition. It’s even tougher than I expected when I came here. I realized that as soon as I had my first test in the series. It’s a lot of work. It’s also a quite different way of driving the car than in ADAC, rather hard to master the car and get up to pace quickly. I am progressing all the time ? I feel it in the driving and I can see in the data that it’s going better. In the NEC races, I managed to get myself noticed, scoring P2 at Nurburgring. Hockenheim was also not too bad, with P9, P7, P7. It was Eurocup standard…

– And there were a lot of Eurocup regulars during those rounds…

– Yeah, exactly. And Hockenheim, Nurburgring ? those are the tracks I know from my years in ADAC Formel Masters. So, when I’m really comfortable with the track, I find driving pretty easy. When I’m on a new track, it’s a lot harder and you have to do more work.

– Your teammates at Josef Kaufmann Racing are quite experienced ? Oscar Tunjo and Steijn Schothorst. They have much more experience than you when it comes to Formula Renault racing. Do they help you out at all?

– Well, for sure, they are teaching me in a way, I think. I get some hints and tips from them and from their data ? I see where I lose and where I gain compared to them. That’s about it.

– Any next year plans for now?

– Honestly, I’m taking it one year at a time. I find it is most important to focus on today.