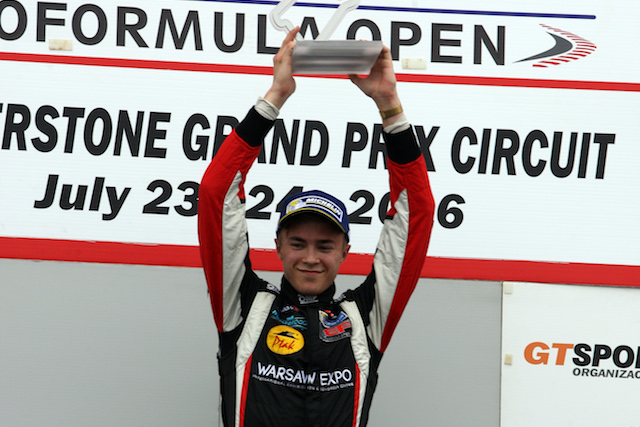 Herta made a poor getaway to be fourth into the first corner Copse, behind Ptak,?Ferdinand Habsburg and Pulcini, though he went around the outside of the Italian at Maggotts to claim third.

Ptak initially built a gap, but was caught on lap three by those behind him. Into Stowe he fended off Habsburg, who then had to defend from Herta at Vale.

Pulcini therefore got a run on Herta into Abbey but they connected, sending both into the gravel. Both continued, but Carlin’s Herta eventually retired and Campos driver Pulcini finished last.

After this, Ptak began building a gap over Habsburg, increasing his margin to as much as 1.8 seconds with two laps to go, only for the Austrian to?take six tenths?out of that on the penultimate tour.

He took a similar chunk out of the gap on the final lap – as rain started to fall – but needed one more to catch Ptak, who finished up just under six tenths ahead.

Damiano Fioravanti benefitted from the Herta-Pulcini crash to finish on the podium in third ahead of RP team-mates?Enaam Ahmed and?Kantadhee Kusiri.

Diego Menchaca was sixth in front of?Igor Walilko,?Hong Li Ye,?Julio Moreno and?Vladimir Atoev, who came from 15th on the grid to pass?Ameya Vaidyanathan on the penultimate lap when the Indian ran wide at the Loop.