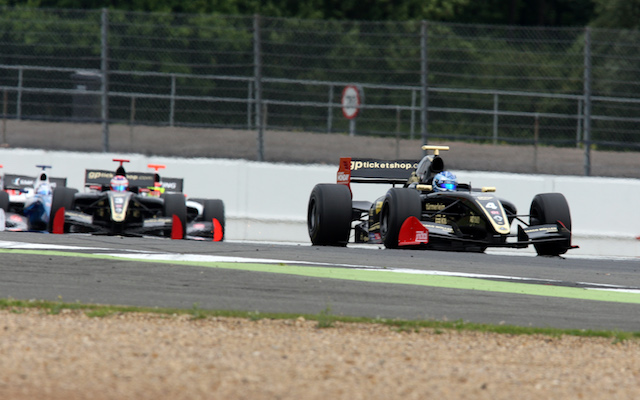 Roy Nissany completed a double victory in Formula V8 3.5 at Silverstone with a dominant drive in race two.

As on Saturday,?Matthieu Vaxiviere had claimed pole, but once more he made a terrible start, allowing Nissany to sweep into the lead from second on the grid.

Rene Binder, his team-mate at the Charouz-run Lotus squad that has had a clear pace advantage this weekend, climbed from fourth to second at the start, but couldn’t challenge Nissany, who won by a huge 17 seconds.

He becomes the first driver to win two?races in one?weekend in the series since Carlos Sainz at Paul Ricard in September 2014, and climbs to second in the standings.

Vaxiviere managed to beat the similarly SMP-liveried car of?Egor Orudzhev into third at Maggotts for the first time, but Orudzhev then went around the outside at Stowe to claim the final podium place, which he would hold at the end.

From there, Vaxiviere went into reverse, with?Aurelien Panis passing him?into Vale a lap later and?Pietro Fittipaldi getting him into Stowe on lap four.

Behind that, championship rivals?Tom Dillmann and?Louis Deletraz had an entertaining scrap over the opening laps. Deletraz went around the outside of Dillmann at Abbey, only for Dillmann to dive back down the inside at Village.

Deletraz then reclaimed the place as both drivers went way wide at Copse as they battled side-by-side.

Dillmann would gain considerably through the pit stop phase,?jumping Vaxiviere and Fittipaldi in the pit lane with a quick change at AVF (Fittipaldi had a problem at his stop and eventually retired) with Deletraz also rejoining behind once he stopped.

While that was going on, Panis was given notice of a one-place drop in the final results for exceeding track limits early in the race.

That meant that Dillmann finished fourth ahead of his fellow Frenchman, even though he crossed the line only seven tenths in front?of Deletraz.

Dillmann had been under pressure from Vaxiviere in the second part of the race, but an attempted pass down the inside of Brooklands by Vaxiviere led to him going deep and allowing Deletraz to pass him with less than?a minute left on the clock.