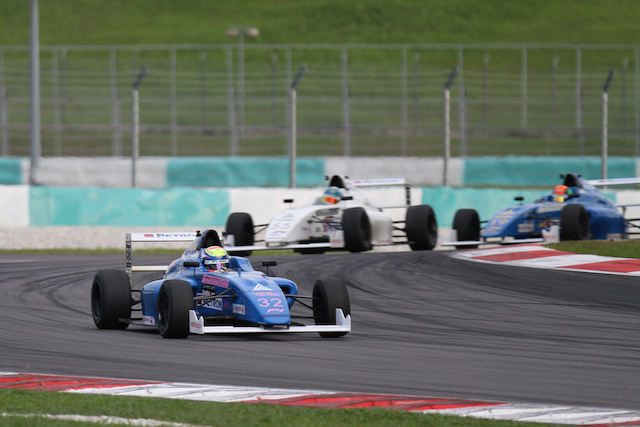 Indonesian driver Presley Martono has claimed the inaugural Formula 4 South East Asia title at the final round at Sepang.

The 16-year-old, who was previously runner-up in the European junior karting championship in 2015, scored nine wins over the 36-race series, with all but two of those coming in a late charge over the final two events as he caught and overhauled?New Zealander Faine Kahia

Martono started the opening race of the finale from pole but a collision with Danial Frost?forced both out, as Kahia finished third behind first-time winner Isyraf Danish and maiden podium finisher Eric Louis.

In race two, Martono came from seventh on the grid to beat Kahia to the win, and he closed the gap further with second to Frost in race three and a race four victory, with his main rival seventh then third.

A win in the penultimate race then gave Martono the initiative, and fifth in the finale was enough for him to seal the crown.

Singaporean Frost won half of the races at the first event at Sepang last August but then missed the next round in the Philippines on age grounds, coming a few days before his 15th birthday, and had points removed, without which he would have come third in the standings after four further victories.

Indian Akash Gowda, who took his fourth win in the season finale, was officially third ahead of Malaysian Danish, who took a clean sweep of podium finishes at the final round having only scored three previously.