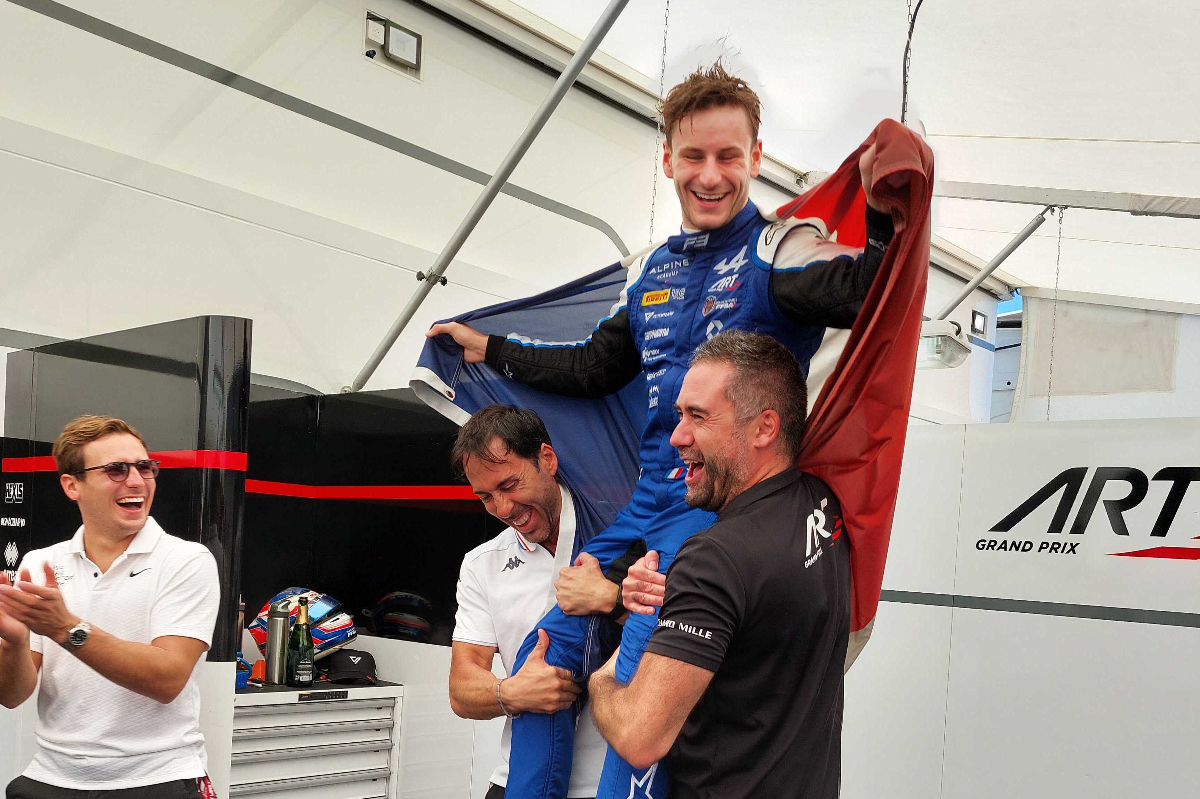 Victor Martins was crowned FIA F3 champion at Monza. Just a few days after, he joined our podcast to talk about the season, the people surrounding him, moments of uncertainty in Monza’s pitlane, the future & more

The ART Grand Prix ace had led the FIA Formula 3 Championship standings for most of the year and enjoyed a six-point advantage over his closest rival Hitech GP’s Isack Hadjar, who was starting Sunday’s season finale 11 places behind him. During the race, it all seemed to be under Martins’ control, as he ran in a comfortable third place with 15 laps out of 22 completed, which was enough to secure the title. However, an unusually high number of contenders going into the last race, a late red flag and a sudden five-second time penalty put Martins through the wringer for several minutes before he was eventually confirmed as champion.

Listen to the full podcast with Victor here, and on Breaker, Google Podcasts, Overcast, Pocket Casts, RadioPublic, Castbox, Apple Podcasts and Spotify. Or read on below for some of his key thoughts about how his season and the title decider went.

“When I came to ART, it was clearly to be the champion at the end of the season, to win the title with them,” Martins said about the goal that was set when he joined the team at the end of 2021, having spent his rookie season at MP Motorsport.

“When you fight with some rookies like [Zane] Maloney, [Ollie] Bearman, [Isack] Hadjar throughout the whole season, they don’t have that kind of pressure of you need to win the title or nothing else because you are a second-year driver. 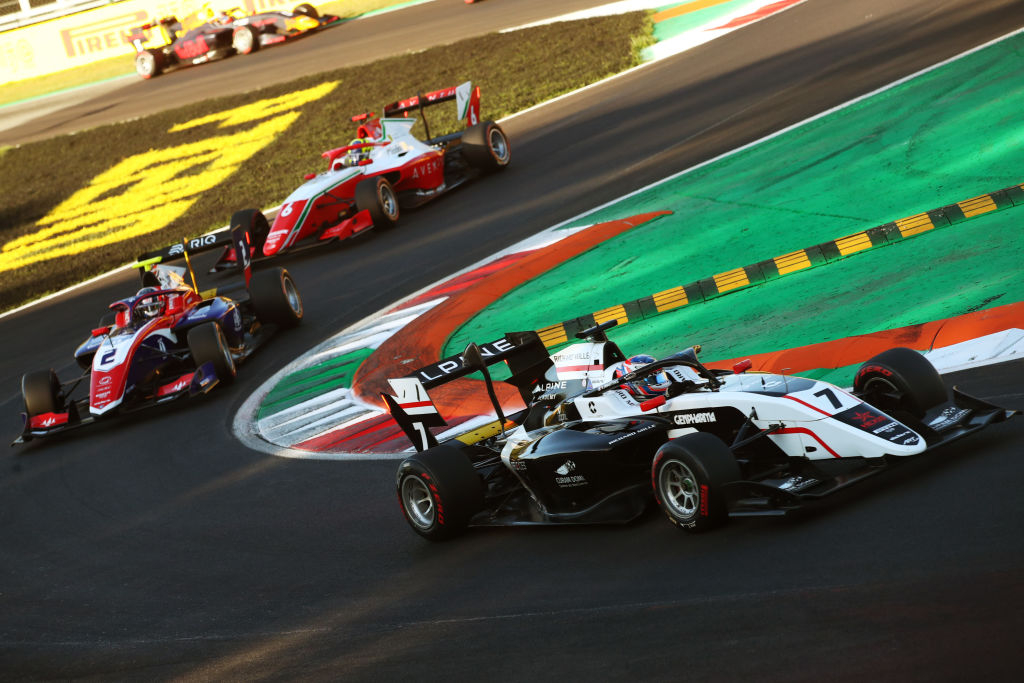 “When you are a rookie like I have been last year [2021], I wouldn’t say it’s much easier, but it’s easier in the way of not focusing on the title, knowing that if you do well, it’s amazing because you are in your first year, and if you do at some point a bit less good or some mistakes. [But] if you are a second-year driver, it’s not normal. It means maybe that you are not good enough or whatever.

“When you are a rookie and don’t do well, you just say to yourself ‘it’s experience, it’s experience that I will correct next year in F3 or the next category’. So, I would say there was a bit of pressure obviously when it was not going well to face the challenge and comeback as quickly as possible to score big points.”

Throughout the 2022 season, Martins surrounded himself with the right people. His ART GP team, the Alpine Academy experts, his family and particularly his brother Nicolas, who attends almost every race, helped him through the difficulties and were key to identify what was wrong and correct it.

“My big brother who has been following me since we started in karting in 2014. He knows me, he knows when I feel the pressure, when I don’t, when I have the wrong approach, when I’m struggling. He can see that easily. He sees everything. When I have a miss on the confidence, all those things, he sees them.”

Their relationship is so close that they’ve set up their own driver management company, called Victory Lane, which Martins has spoken to Formula Scout about before when the Martins brothers’ protege Vlad Lomko won the Pau Grand Prix. But back to Martins’ own driving career.

“I think also with the team we worked really well. They were talking a lot about myself. I would say we worked really well in terms of confidence in the team between each other, the team towards me and me towards the team. So, it’s much easier when you don’t do well, when you do a mistake, when it’s your fault, to accept it and work on it and come back stronger. 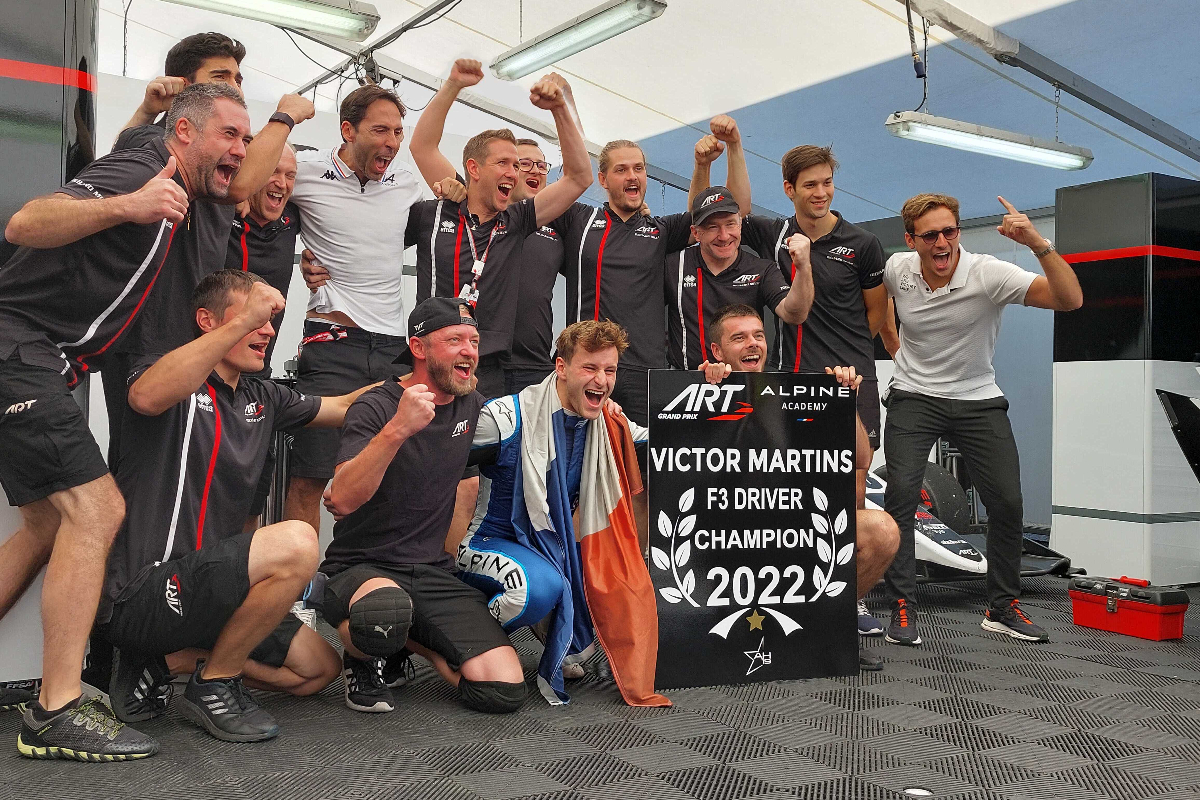 “So, for sure with ART, Alpine also, they have been supporting me a lot also in the right way. Everything I needed, they were there to support me, giving me advise on how to approach the championship, how to manage it, how to not think about it also, just to drive, to not feel the pressure and let go everything.

“Everyone has been really important. It’s why I would say since Budapest and Spa-Francorchamps, after it, I came back a lot stronger and quite quickly into the championship, into my mood. We really worked well there and we came back to win that title, so for sure they were there and I thank there for that, for being on my side.”

The quick recovery from two tough rounds in Hungary and especially at Spa, where he didn’t score any points, were key to Martins becoming the first non-Prema driver to be crowned FIA F3 champion.

“This feels good you know,” he said. “I wouldn’t say it’s the best thing that I can hear, but I would say it’s an amazing feeling because you break everything and you put the ART name on that title. I’m not the one who just wants to take the title and show to everybody that I have done it with ART and the others with Prema, but I would say I’m happy, they deserve it.

“I know them since a long time. Even if it’s different engineers, different mechanics in F3 than in Formula Renault, the team is just amazing, they work really, really hard to get it. Sometimes they didn’t get the title, but they were deserving it like crazy, so I really wanted to get that one for them, to reward them for all the hard work. I would say it’s the first team to come on the track in the morning, the latest team to leave, and this is not for nothing.

“To win with a French team also it’s quite special. We were all French I think with Alpine, ART and myself, so it feels good and I hope they will have really good drivers to get some more titles in the future, and I wish them all the best in F3 for sure. I hope it will, you know, continue this era. Before it was Prema, now it will be ART for a long time.”

Martins’ triumphant campaign kicked off really strong, and things “were looking really good, maybe a bit too good” after the opening round, something that might have affected him later in the year, the Frenchman reckons. 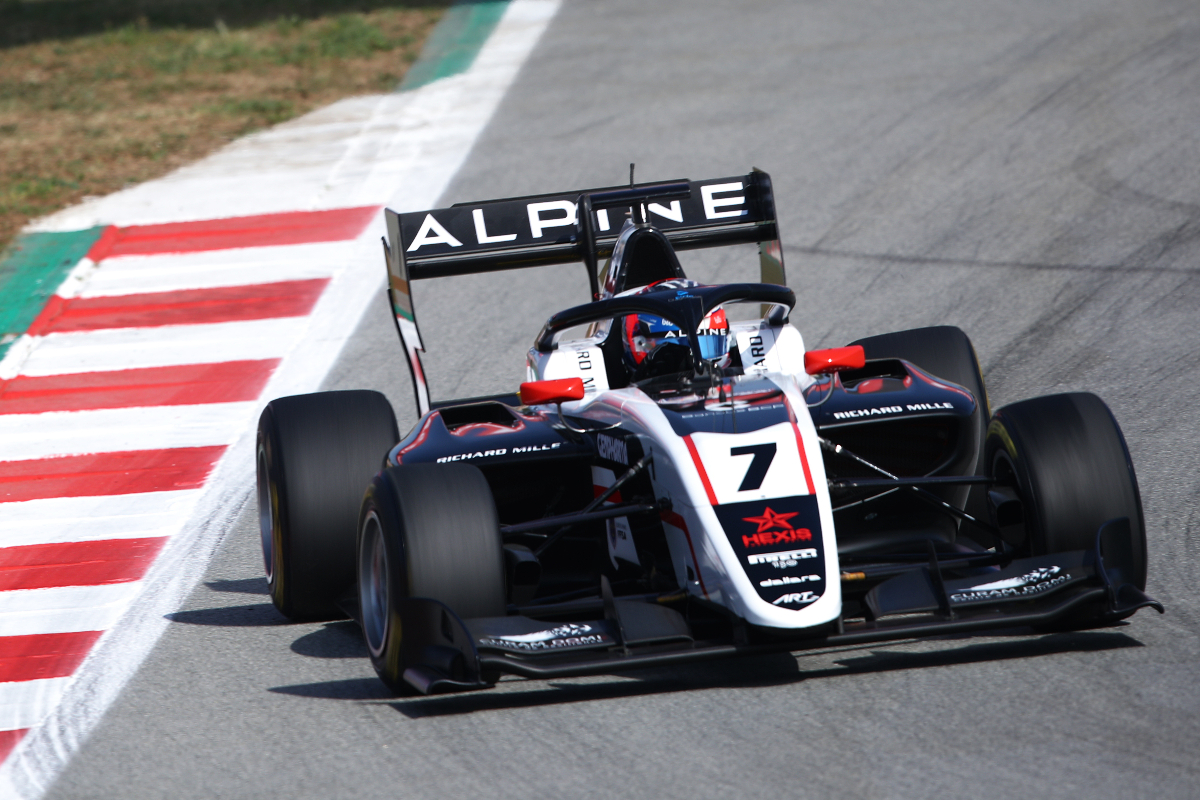 “It’s the first season, first year that I started really well like that with already two feature race wins out of three rounds. So, maybe looking at it, maybe it started too well. I think it’s maybe because of that that I kind of released the pressure and felt that it was good, I had the right car, the right team, so maybe I have seen the title a bit too early.

“In the end, it’s something that you take. Two feature races [victories] out of three rounds, it was just awesome. I had the chance to win some more in the season, but at some point we were sometimes lacking a bit of pace or like Monza. I think if Monza was earlier in the season, I think I would have won it because I would have taken the risk, I would have taken the risk also to defend from the others. So, I would say it’s different. It was good to start on the right foot.”

The Alpine junior already knew how it feels losing a championship in the last round. It happened to him in French F4 in 2017 and also in the Formula Renault Eurocup in 2019. He first didn’t let flashbacks of those moments into his mind, but he admitted that when the race was halted, it was impossible not to think about such an end.

“I really wanted to stay in my zone, to stay focused, also focus myself on the right things, the solution, how to be good during that weekend, how to approach the weekend, which mindset I wanted to be in. I had been managing the pressure and the emotions quite well during that weekend, but for sure when the safety car and red flag came out, I was like ‘no, please, I lost championships because of some mistakes in the past’.

“I just didn’t want that moment to turn around and be like that in the past when I lost the championship for nothing. So, I thought about it during the red flag, but more when I saw the penalty of five seconds and I was like ‘no, please, that’s a bit of injustice’ because of how things were going in Monza during the second race. 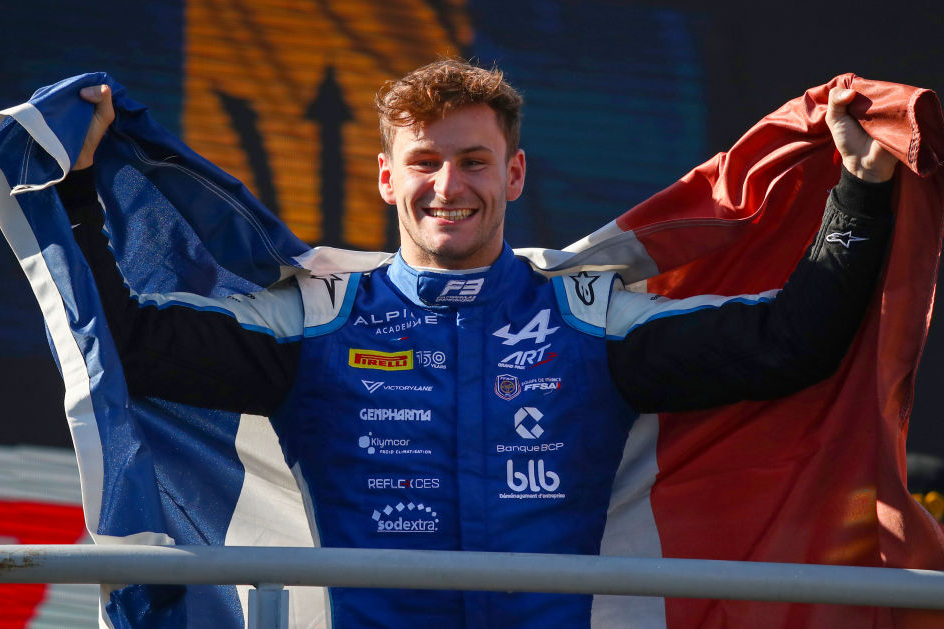 “I was doing a mega job, and if I’m not winning the title, to lose it like that would be a big shame and a big injustice for me.

“It was too much,” he said about the moments sitting in the pitlane without knowing what was going to happen. “I feel I cannot describe how it was because I felt I didn’t have the power anymore. I did a mega race, a good start, I put myself out of trouble, I was waiting for the others to do mistakes, I was in my zone, I said ‘okay, finish third, it’s fine, I will take it’.

“It was done. If the race was finishing like that, the championship was ours, and then the safety car and red flag came out and I became upset, I became sad, I became everything. I was just losing my mind not knowing why. I was not understanding why things were going like that because of the job I did before, but in the end, I was trying to stay calm at the same time because I felt I did the job, it was my title and in any way I would get it.

“Just when you release all the pressure, all the emotion when I learnt I was champion, it was just too good and I was waiting for that feeling since I would say the world championship in karting in 2016.”