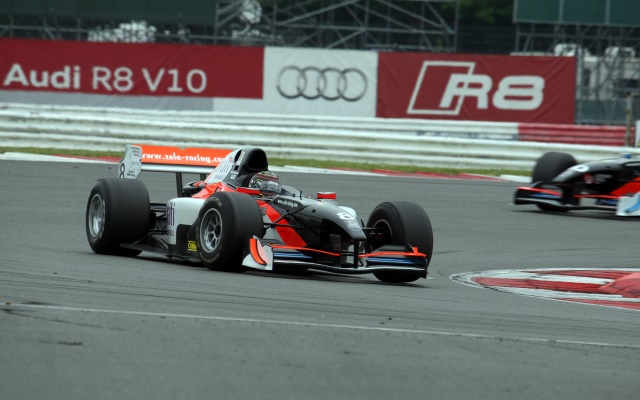 Zele Racing’s Antonio Pizzonia has increased his championship lead by taking an easy victory in the series’ nine-lap first race at Silverstone.

Pizzonia overtook poleman Facu Regalia off the line and finished 9.5s ahead at the checkered flag.

The grid, originally set to feature eight cars, was down to seven before the cars even fired up with the Paolo Coloni Racing #69 sitting driverless in the garage.

The formation lap claimed another – Christof von Grunigen, lining up in fifth, couldn’t get going and was out for the day, causing an aborted start.

The race, as such, was shortened again, having previously been cut down to ten laps due to what was cited as “environmental restrictions”.

Regalia, who dominated qualifying, was slow off the start, allowing both Pizzonia and his Zele teammate Luis Sa Silva through into turn one.

The Argentinian then worked his way around Sa Silva round the outside at Copse, the Angolan then coming under pressure from Nikita Zlobin.

Despite Regalia quickly retaking second, Pizzonia was unfazed out front and did not allow the Argentinian to close in, eventually forcing him to ease off and bring the car home in second.

Behind them, Sa Silva held off Zlobin for third, the Russian staying close for many laps but never finding a way past.