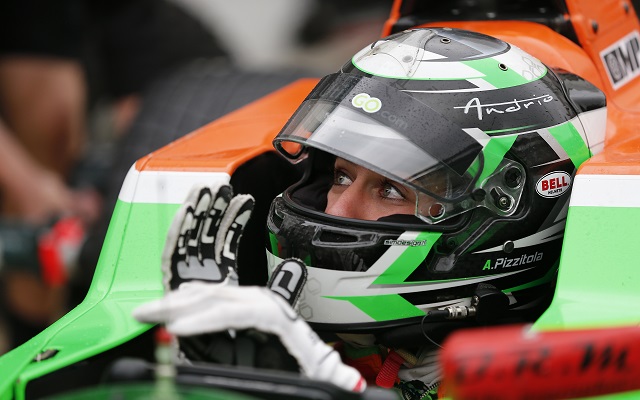 French driver Andrea Pizzitola led from lights to flag to record his second victory in the Eurocup Formula Renault 2.0 in race one at the Hungaroring.

The Manor MP racer produced a measured drive from pole to pick up the 25 points for victory at the checkered flag.

Front row starter Charles Leclerc – racing as Fortec’s wild card entry – managed to narrowly hold on to second into turn one before setting out after Pizzitola.

The young Monegasque, who’s contesting his debut season in cars, put the Frenchman under serious pressure in the early laps, but then dropped two seconds back.

For the remainder of the race, Leclerc ended up busy defending his spot from championship leader Nyck de Vries and ran out of time to mount another challenge at Pizzitola.

As such, the Manor driver triumphed, whilst Leclerc settled for his consecutive second P2 finish in the Eurocup. De Vries took third, banking 18 points due to Leclerc’s status as a guest driver.

Hans Villemi managed a great start off third, but was forced onto the outside line into turn one and slipped behind de Vries. The Estonian then fought to keep fourth from Gustav Malja and managed to maintain his position until the checkered flag, recording his career-best finish in the series.

The same was true for Malja, who ended up a solid fifth, right ahead of Koiranen’s Ignazio D’Agosto and KTR’s Alex Albon.

Teammates Bruno Bonifacio and Dennis Olsen were involved in a lengthy scrap for position, eventually ending up eighth and ninth respectively. Nick Cassidy held on to tenth, while Egor Orudzhev picked up the final point in P11.