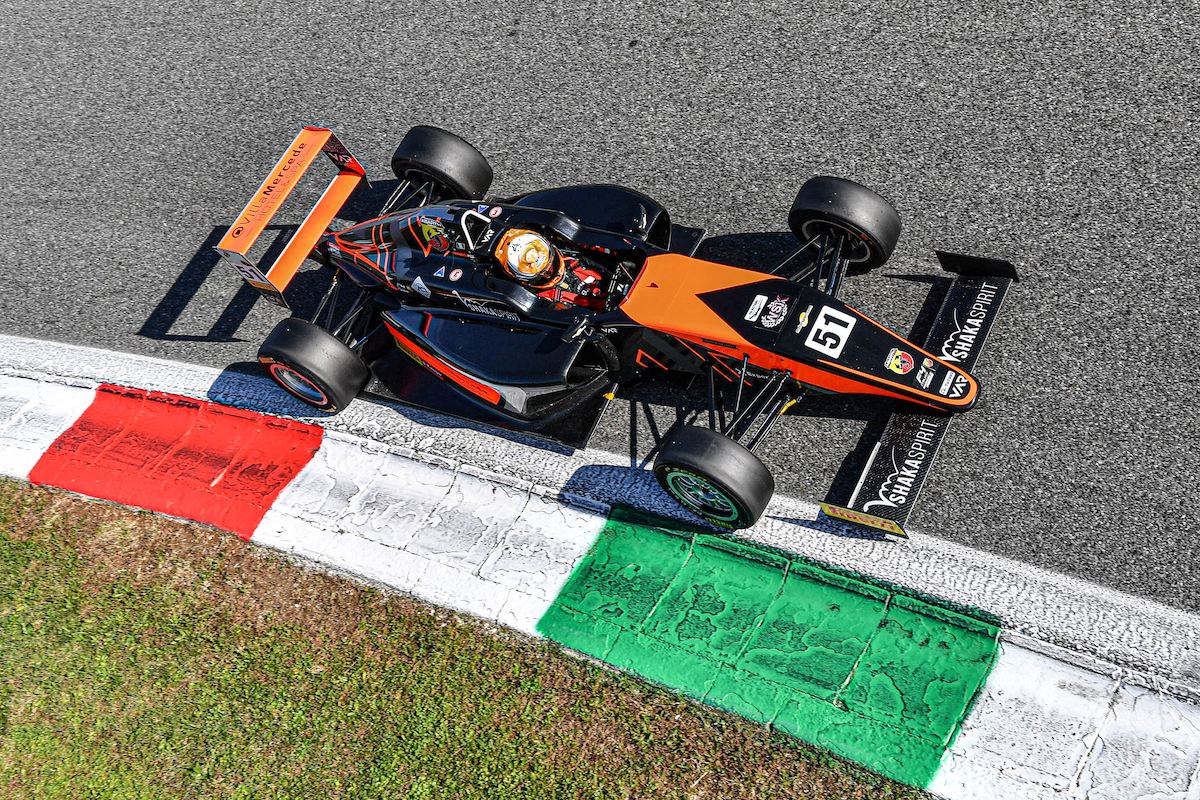 Francesco Pizzi took his second win of the weekend in race two of the Italian Formula 4 round at Monza.

Unlike in race one, Pizzi kept Gabriele Mini at bay to take the chequered flag first, but it’s the Van Amersfoort Racing driver who is under investigation on this occasion following a safety car period.

An electrical issue prevented polesitter Andrea Rosso from taking the start, allowing Mini to lead the field into the first corner, but Pizzi grabbed the lead by the end of the opening lap.

Mini briefly took the lead one-third of the way through the 30-minute race around the outside of the first chicane, but Pizzi soon reclaimed the position.

Then came drama as the safety car was deployed for a first-corner clash between Hamda Al-Qubaisi and Han Cenyu. As the field checked up behind leader Pizzi, third-placed Pietro Delli Guanti was hit from behind by fifth-placed Filip Ugran, eliminating both cars on the spot.

At the restart with five-and-a-half minutes remaining, Pizzi slowly controlled the pack and was able to keep his lead. He was placed under investigation for the safety car procedure, but it’s currently unclear whether this was for his restart or for the way that the pace was slowed when the safety car was deployed.

Mini looked around the outside of Pizzi at the chicane on the restart but got wide and lost second place to his Prema team-mate Sebastian Montoya.

Behind, another Prema driver Dino Beganovic was spun around in a coming together that eliminated Lorenzo Patrese and Dexter Patterson from the race.

Montoya looked on course for his maiden podium finish, even as Mini reclaimed second place at the start of the final lap. However, Gabriel Bortoleto also tried to follow Mini past and banged wheels with team-mate Montoya, who was forced into the gravel trap, dropping him down the order.

Pizzi made the last of several lock-ups into Ascari for the final time under pressure from Mini, and drove in his mirrors down to the Parabolica, but held onto take the win.

Bortoleto took third ahead of Iron Lynx driver Leonardo Fornaroli and Jenzer Motorsport duo Santiago Ramos and Piotr Wisnicki, who both claimed their best ever results.

Montoya finished eighth behind Jesse Salmenautio and just ahead of Taylor Barnard, who stormed from the back row of the grid to finish ninth in just his fifth car racing start.