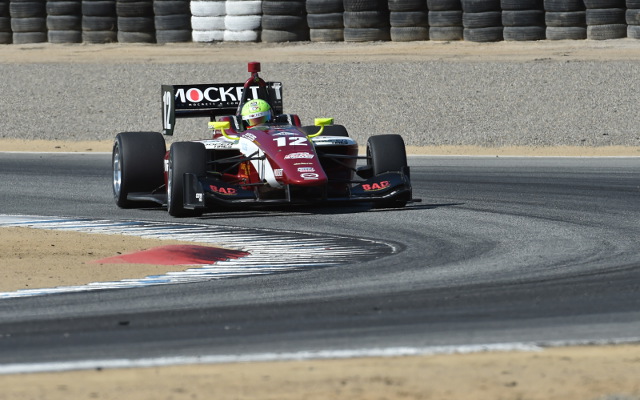 Polesitter Max Chilton did a great job to lead the field from the start, but his hopes of victory were dashed when he clipped the tyre wall on the entry to the Corkscrew on lap three.

Chilton would have to pit for a puncture on the left rear, and would spend most of the race trying to catch a debuting?Heamin Choi?to avoid a last-place finish. That gave Pigot a lead he would not relinquish the rest of the way.

Felix Serrales ran fifth for most of the race, but the ex-Formula 3 driver’s day ended with just four laps to go due to a suspension failure on his IL15.

Pigot would check out in the final laps for his series-leading fifth win of 2015, as he finished ahead of his teammate?Kyle Kaiser, who was under pressure from?Ed Jones in the closing laps for second.

Jones, meanwhile, finished third after spending all race long?battling?Sean Rayhall, who recorded the fastest lap of the day at a 1m16.715s.

Jack Harvey made little progress and could only hold onto fifth place, finishing ahead of rookie teammate?RC Enerson.

This puts Pigot at 326 points, now eight points ahead of Harvey, and 21 points ahead of Jones going into the final race. Enerson is eliminated from championship contention with his sixth-place finish.