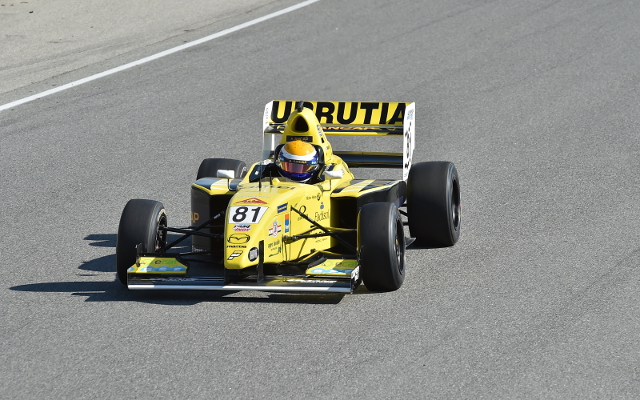 Santiago Urrutia has clinched the 2015 Pro Mazda Championship with a second-place finish behind race winner Garett Grist in what was an eventful first race at Laguna Seca.

Urrutia’s first single-seater title is a significant and emotional one for racing fans in his home nation of Uruguay, 16 years and one day since their hero Gonzalo Rodriguez lost his life in a Champ Car practice accident at the same circuit.

Timothe Buret got an early jump on the field at the start of the race, which triggered a chain reaction behind him.

O’Ward and Franzoni retired due to damage, while Connery would lose two laps in the pits.

The incident would send Buret to the tail end of the field when the race restarted with 20 minutes to go.

But Buret jumped the start again when the race restarted, which forced race officials to hand him a drive-through penalty, ending any chance the Frenchman had to challenge for the title.

Tan wasted no time climbing up the order after pitting for minor repairs under the safety car, getting up to sixth place in just a couple of laps, but his title bid was also finished.

Urrutia would get past?Will Owen after conceding second place to him on the restart, as would championship rival?Neil Alberico, the last remaining challenger to Urrutia’s title hopes.

As Grist continued to hold a comfortable margin over Urrutia, it put the Team Pelfrey driver in a position to capture the title.

Then, on the penultimate lap, as he was trying to keep Urrutia within his sights, Alberico went off at the Corkscrew, putting him out of the race.

That guaranteed Urrutia’s title, the Uruguayan taking the chequered flag in second to confirm his crown. Ahead of him, Grist led every lap from pole to win his second race of the 2015 season.

Daniel Burkett finished ninth despite being involved in the melee at the start of the race, while paraplegic driver?Michael Johnson completed the top ten.