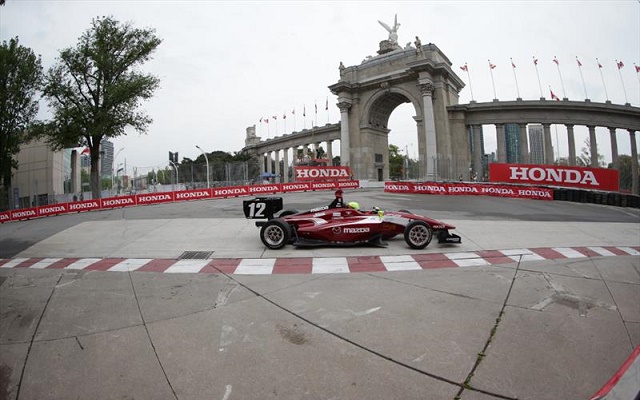 Spencer Pigot held off championship rival Jack Harvey to win the first race of the Indy Lights round at Toronto.

After his Alabama double, Pigot did not make the podium in three Indianapolis races and will now be back in title contention with this win.

The race, however, was also punctuated by a horror crash for RC Enerson, who lifted off after hitting poleman Nelson Piquet in the fight for the lead.

A chaotic opening to the qualifying session earlier today promised a similarly messy beginning to the race and that’s exactly what took place.

First, Juan Piedrahita spun getting on the throttle even before the line and hit Scott Anderson. The Colombian retired on the spot, while Anderson limped to the pits before also calling it a day.

Up ahead, however, Pigot challenged Piquet for the lead, giving him a push into turn one and allowing Enerson to move into first around the outside.

However, after getting tapped in the rear wheel by a rival, Enerson got loose and narrowly kept the car from going into the wall. As such, Piquet reclaimed the lead before the caution came out for Piedrahita.

At the restart, Piquet kept Enerson at bay, while Pigot reeled in and subsequently passed Harvey to reclaim third.

Soon enough, Enerson began to trouble the star debutant in front, having an early look around the outside of Piquet’s Carlin.

He backed out but was within a second of Piquet over the next few laps, closing in on him again on lap 14.

What followed was a monstrous crash for the lead. Enerson went for a move on Piquet going into turn three, looking at the inside before trying to cross over the other way.

The SPM driver then hit Piquet’s rear tyre and went high up in the air, hitting the catch fence, coming back to the ground and then skidding through the runoff upside-down.

The car climbed over the first tyre barrier before finally before finally coming to a halt and, luckily, Enerson emerged unscathed. He was walking after being helped out of the car by the crew, was subsequently taken to the medical centre and released shortly thereafter.

Piquet, who made it to the pits before retiring, was calm when interviewed by the Mazda Road to Indy radio crew, putting the blame on Enerson but saying that “this was part of [the young drivers’] learning curve”.

When the race resumed and went green, it was Pigot keeping the lead, with championship rivals Harvey and Jones making up the provisional podium.

And, as Ethan Ringel‘s car expired in the pitlane, there were now only six drivers left on track.

While Pigot nailed the restart out front, Felix Serralles was the big mover, working his way around Kyle Kaiser and then putting pressure on Jones for third.

The Emirati cracked, missing his braking point into turn three and failing to turn in. He managed to avoid burying his car in the tyres and rejoined, but was way adrift of the top five.

Serralles’ charge ended as he got to third with Pigot and Harvey setting the pace out front. The Brit was a constant presence in Pigot’s rear-view mirrors but the Juncos driver kept his cool to win.

Serralles claimed third, with Kaiser and Shelby Blackstock recording their best finishes of the season in fourth and fifth. Jones rounded out the finishers.

Pigot’s top second-best lap in qualifying means that he will start tomorrow’s race from pole.