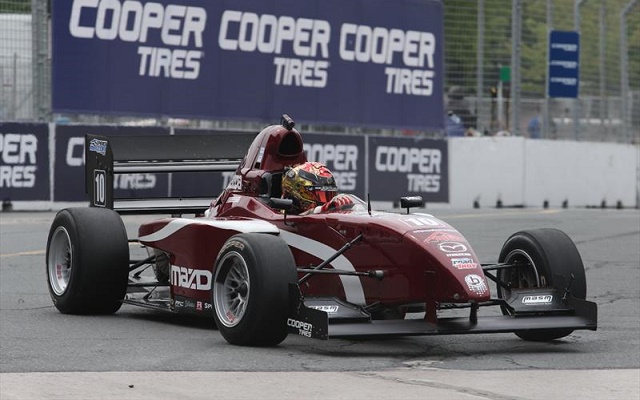 USF2000 champion Florian Latorre converted his first pole in Pro Mazda into a maiden win in race one at Toronto.

The Frenchman held the lead off the line and was class of the field at the restart, which followed after a lengthy stoppage for a number of lap-one crashes.

Originally, it was a solid getaway off the line, Latorre maintaining the lead over Garett Grist. But a race that was clean through the first two corners got very messy into T3.

Neil Alberico, coming into the race eight points off the championship lead, hit the wall as he tried to duck on the inside of his title rival Santiago Urrutia on approach into the low-speed corner. The American was out of control and collected Weiron Tan as the Malaysian turned in, both heading into the barriers.

As this was going on, there was mayhem on the outside as well – Daniel Burkett hit Will Owen, while Dalton Kellett and Jose Gutierrez also came together. Three of the drivers retired on the spot, with Owen making it further down the track with a broken rear wing and retiring as well.

The clean-up for the incident was lengthy and the field cruised under caution for six laps, only going back to green with less than 13 minutes to go.

Latorre was immediately on it when the green flag finally came back as he immediately checked out from the rest of the field. He was helped by Grist struggling for pace and coming under massive pressure from Patricio O’Ward for second.

The duo were soon side by side battling for the spot and Grist had to give up the place, only to allow teammate Timothe Buret through shortly thereafter. Just a lap later, he was also passed by Victor Franzoni.

As Latorre and O’Ward brought it home out front a maiden win and a maiden podium respectively, Buret held off Franzoni to finish third.

Grist was sixth, ahead of Kyle Connery, Urrutia, Raoul Owens and Alessandro Latif.