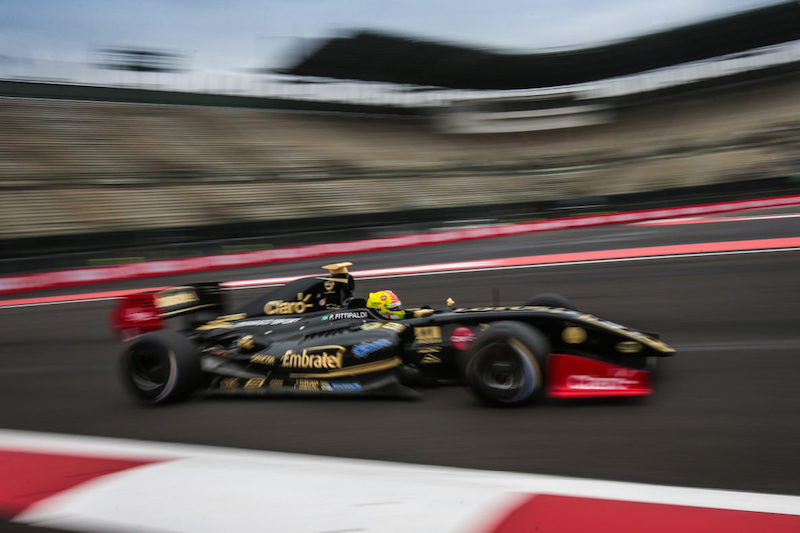 Pietro Fittipaldi took victory in the first World Series Formula V8 3.5 race at Mexico City ahead of Matevos Isaakyan to reclaim the series lead from the Russian.

Egor Orudzhev meanwhile suffered a bizarre exit from the race at the very first corner, which he had approached in fifth position.

Unable to get slowed down under braking, he almost wiped out pole-sitter Fittipaldi at the apex before heading straight on over the grass.

Before he could rejoin the track, he lost control of the rear of his car and made contact with the barrier on the outside.

After the resultant safety car period, Fittipaldi built a two-second margin over fellow front-row starter Alex Palou, whose Teo Martin Motorsport team-mate Konstantin Tereschenko had taken third on the inside of Isaakyan at the first corner.

Isaakyan got past his compatriot after three laps and then harried Palou, eventually getting past through Turns 4 and 5 with 10 minutes remaining.

He was unable however to do anything about Fittipaldi?s margin, which remained at 3.2 seconds until the finish.

The Brazilian goes from five points behind Isaakyan to two points in front, having also qualified on pole for race two.

Home favourite Alfonso Celis damaged his nose-cone on the rear of Isaakyan?s car at the first corner of the race and slipped from fourth to sixth, but did manage to get past Rene Binder around the outside of Turn 4 to finish fifth.

Yu Kanamaru was seventh, while the second Mexican Diego Menchaca beat Roy Nissany to eighth after two off-track moments ? the latter coming while he snatched the position in the stadium section on the final lap.