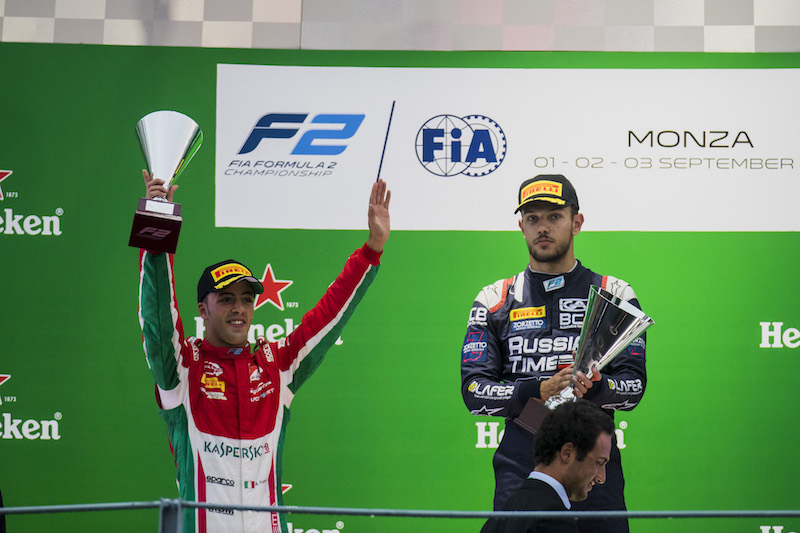 Antonio Fuoco has been handed his first Formula 2 win after fellow Italian Luca Ghiotto was penalised following the chaotic ending to the feature race at Monza.

Ghiotto had taken the win after Charles Leclerc and Nyck De Vries collided on the final lap of the wet race at the exit of the first chicane.

The Russian Time driver had just cut the chicane after trying to out-brake De Vries as they battled over the lead, and once the contact happened behind him he was unable to concede in the same way that Leclerc had done one lap earlier.

The stewards judged that Ghiotto had gained an advantage by running off the track and have handed him a five-second penalty.

Having crossed the line 1.9 seconds ahead of Fuoco, this penalty relegates him to fourth in the final results, also falling behind Nobuharu Matsushita and Nicholas Latifi.

He would also have slipped behind Alex Albon had the original fifth-place finisher not been slapped with a 10-second penalty for last-lap contact with Norman Nato.

The Anglo-Thai is therefore relegated to 14th, with Sean Gelael promoted to fifth ahead of Sergio Sette Camara, Louis Deletraz and Gustav Malja, who inherits reversed-grid pole.

De Vries was given a 20-second penalty for causing the contact with Leclerc, but this has no affect on his result or race two grid position as he was the final classified finisher in 18th, one place behind Leclerc.