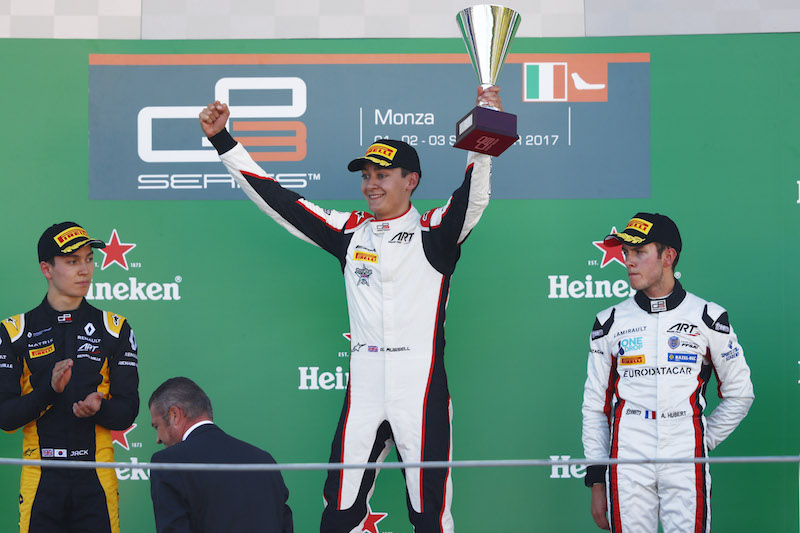 George Russell won a battle with ART Grand Prix team-mates Jack Aitken and Anthoine Hubert to win the postponed and solitary GP3 race at Monza, while Nirei Fukuzumi was unable to start from pole.

Fukuzumi, who earned pole position courtesy of the fastest time in practice after qualifying was cancelled due to the wet conditions on Saturday, was unable to make it beyond the end of the pit-lane due to a technical issue, enabling Russell to claim the lead at the start.

A big crash at the second chicane, in which Leonardo Pulcini mounted the rear of Alessio Lorandi’s car, sending both into the barriers at high speed, caused a lengthy safety car period while Pulcini was extracted from his car.

The race finally restarted at the end of lap eight with Russell leading Hubert, who managed to take the lead once DRS was enabled a couple of laps later.

Russell later reclaimed the advantage before the virtual safety car was deployed when Juan Correa went into the back of Jenzer team-mate Arjun Maini into Turn 1.

The top three of Russell, Hubert and Aitken went three wide down the main straight at the restart, with Aitken managing to sweep from third into first.

On the following tour, Russell got back in front into the first Lesmo, and he was still there when the safety car re-appeared heading on to the final lap.

Aitken and Hubert completed the podium after a clean and respectful battle between the ART trio, but behind them there was carnage as the drivers were unleashed for the first time since practice.

Already at the start, the five drivers immediately behind the ART trio cut the first chicane after things got too close under braking, with the subsequent collision between Pulcini and Lorandi helping Niko Kari to climb from 14th on the grid to fifth.

The Finn then took fourth from Steijn Schothorst despite his team-mate forcing him over the inside kerb in the second chicane.

In what looked like it could be a metaphor for the changing of the guard in the Red Bull Junior set-up, debutant Dan Ticktum then challenged Kari on the run to Ascari, but when he tried to slot in behind at turn-in, slight contact was made with Dorian Boccolacci behind him, giving the Briton a puncture.

Kari was later able to break free of the action behind and looked set to deliver a great response to the news that he will be dropped by Red Bull at the end of the season – only to drop it on his own between the two Lesmos on the penultimate lap, crashing into the barriers and bringing out the safety car.

Marcos Siebert eventually came through for fourth at the scene of his Italian Formula 4 Championship glory last October, with Schothorst finishing fifth on the road but taking a five-second penalty for one of many indiscretions that drops him to 12th.

Ryan Tveter therefore took fifth after starting 17th, ahead of Trident team-mate Giuliano Alesi, who will be denied the chance to go for four consecutive reversed-grid race victories this weekend.