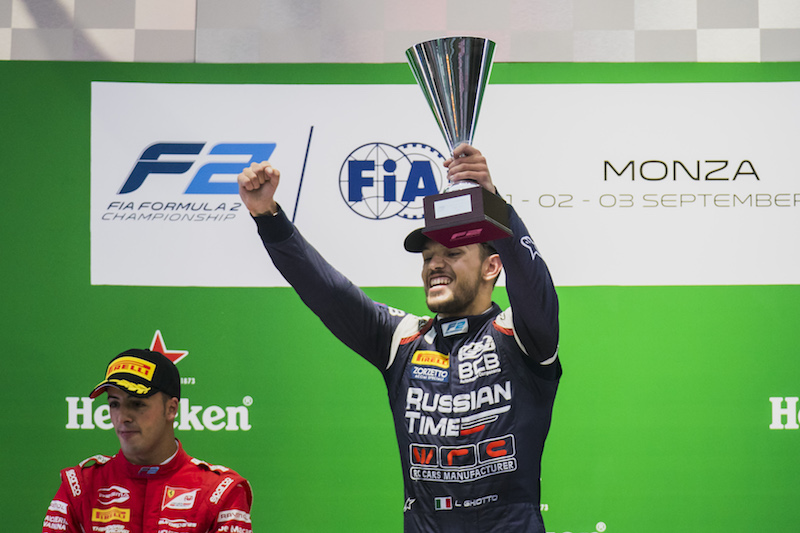 Luca Ghiotto claimed a last-gasp victory in a chaotic finale to the Formula 2 feature race at a wet Monza, after championship leader Charles Leclerc and race-long leader Nyck de Vries collided while battling with him on the final lap.

De Vries had led from the start, keeping ahead of a charging Leclerc through the pair’s late mandatory pit-stops, just after which third-placed Oliver Rowland was forced to stop when his rear-left wheel came loose.

That caused a safety car, and at the restart with only two laps to go, Leclerc – who went from seventh on the grid to second place on the first lap – got alongside De Vries down the pit straight.

At the chicane, the Prema driver went deep, and as he slowed around Curva Grande to let De Vries through, Ghiotto swept past both of them to snatch the lead.

De Vries got back alongside Ghiotto down the pit straight heading onto the final tour, and this time it was the Russian Time driver’s turn to miss his braking point and head straight on.

Before he had the chance to give up the position, De Vries and Leclerc had collided on the exit of the chicane when the Monegasque driver tried to come past the wheel-spinning Dutchman.

The contact sent Leclerc into the barriers on the exit, and both drivers ended up taking a trip through the gravel trap at the first Lesmo due to the damage incurred, finishing 17th and 18th.

Up front, Ghiotto – who started 11th – was free to take his maiden feature race victory, and Antonio Fuoco came through to make it a one-two at home for Italy with pole-sitter Nobuharu Matsushita completing the podium.

The race was delayed by over two hours following the weather-related interruption to Formula 1 qualifying, and it provided a debut for the new wet-weather rule also introduced this year to F1 that meant several laps were completed behind the safety car before the field was brought back to the grid for a standing start.

Another formation lap was caused when Santino Ferrucci stalled out of ninth place upon arriving at the grid, but when the race did finally get going, De Vries got a better getaway than Matsushita to lead the field into the first chicane.

Artem Markelov was arriving quickly behind however and threw his car to inside of De Vries’ at the apex, causing contact between themselves and Matsushita, with all three cars going across the chicane.

All three emerged ahead of Leclerc, who was up from seventh to fourth and quickly cleared a hobbled Markelov as well as Matsushita, before setting off after De Vries.

At the scene of his only two wins of the Formula Renault Alps campaign that De Vries dominated in 2014, Leclerc caught his rival on lap eight of 23, only for De Vries to immediately build a gap of over one second again. 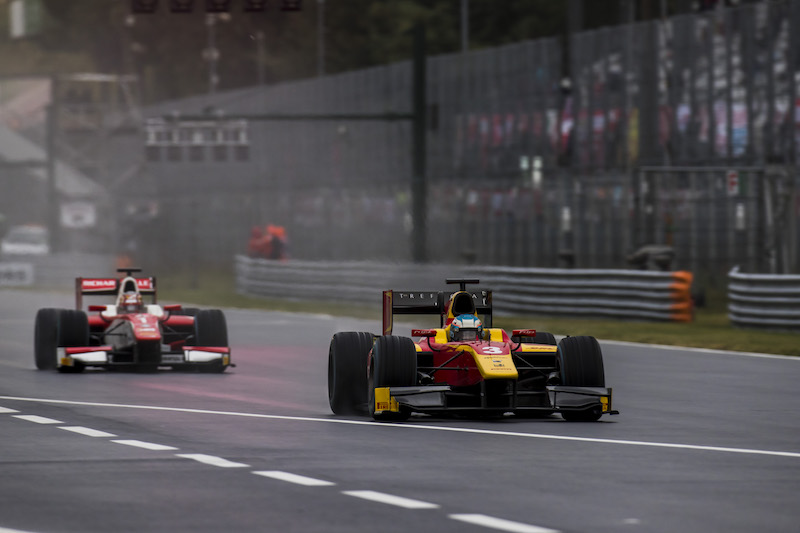 Come lap 15, they were back together, and after two further laps Leclerc chose to pit for a new set of wet tyres. The attempted undercut didn’t work however, and De Vries emerged from his stop one lap later still ahead.

Leclerc’s main title rival Rowland had climbed from 13th on the grid to run third prior to his issue, eventually passing a stubborn Roberto Merhi on lap six and taking third from Matsushita a lap later.

After Rowland’s retirement, victory for Leclerc would have put himself in a position to wrap up the title on Sunday, but the gap between them instead remains at 59 points.

Nicholas Latifi finished fourth after starting alongside Rowland on the seventh row of the grid, while Alex Albon recovered from turned around by contact from Markelov on the first lap to take fifth.

Sean Gelael got up to sixth with a great end to the race, with Merhi crossing the line seventh but falling to 12th after the second of two time penalties was applied following off-track adventures.

That put Sergio Sette Camara up to seventh ahead of third-place starter Louis Deletraz, Gustav Malja and Markelov, who made his pit-stop early after his first-lap clashes.