Pierre Gasly leads the way in GP2 practice at Monza 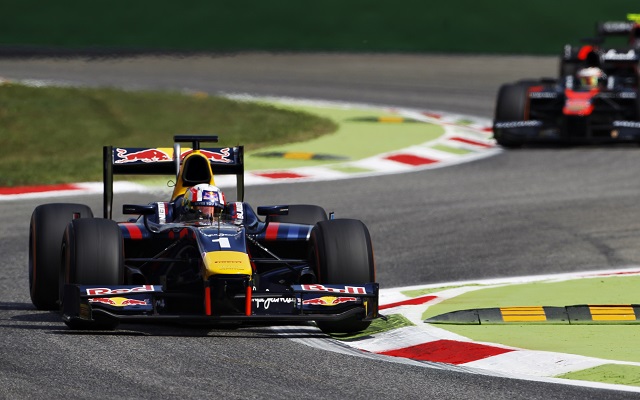 Pierre Gasly was fastest in the 45-minute-long GP2 practice session at Monza, beating the championship’s top three by more than three tenths.

The DAMS driver set his benchmark time early in the session, and it would prove to be unbeaten afterwards.

The Frenchman was followed by?Alexander Rossi,?who jumped into second with a late-lap, though his early running included an off-track moment in the gravel at the exit of the second Lesmo turn.

Rio Haryanto and Stoffel Vandoorne, the latter missing the first turn twice in the first half of the session, were third and fourth quickest respectively.

Rene Binder, returning to the series after missing Spa-Francorchamps due to illness, has switched from Trident to MP Motorsport and kicked off the weekend with a promising fifth.

The Austrian ended up 0.03s and 0.05s ahead of Sergey Sirotkin and Richie Stanaway respectively, while the top ten was completed by Alex Lynn, Arthur Pic and Mitch Evans.

The field’s three newcomers completed low-key sessions with Meindert van Buuren ending up as the quickest one in 22nd.

Patric Niederhauser, 23rd, had a woeful practice, having stalled on the exit of the pitlane while Carlin’s Jann Mardenborough ended up 25th, more than two seconds off the pace.