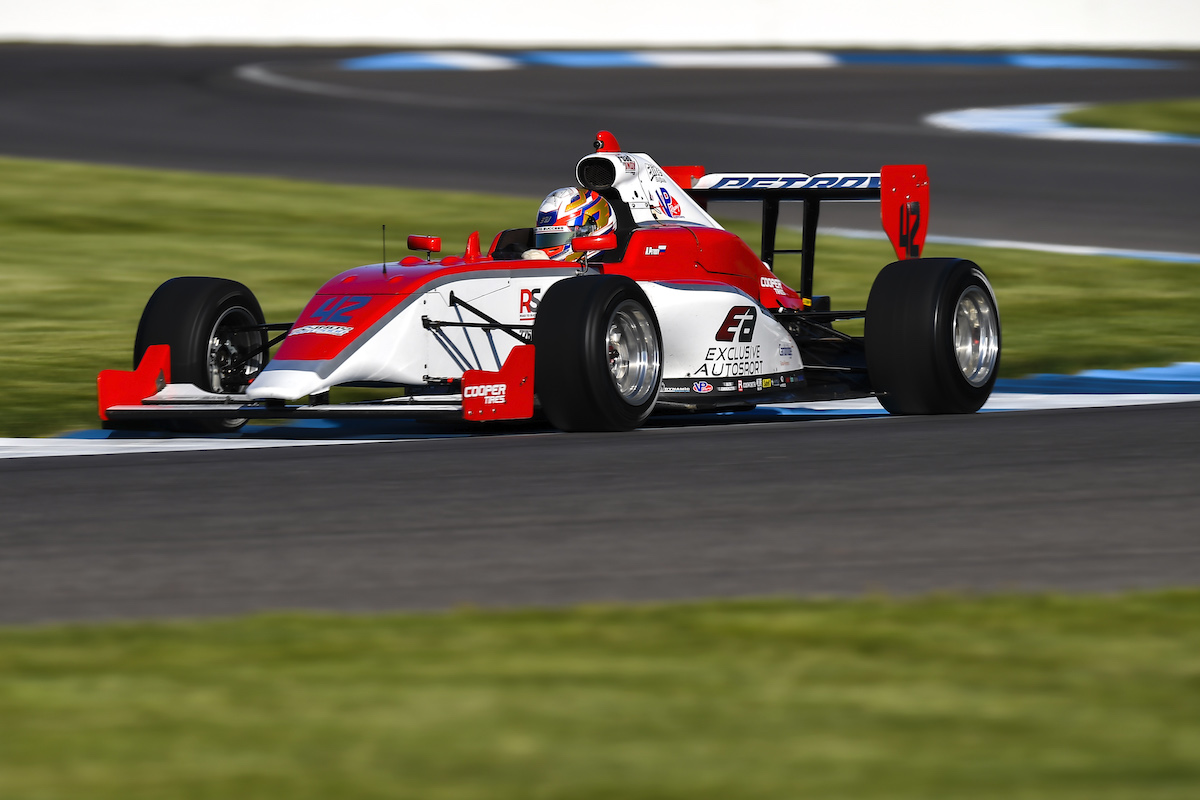 Exclusive Autosport took a one-two finish in the second Indy Pro 2000 race of the weekend at Indianapolis, fronted by Artem Petrov.

Petrov started a lowly ninth, but a chaotic start allowed him to climb up to second by the end of the first lap of 25.

Juncos Racing’s Reece Gold started on pole position but locked up significantly going into turn 1 on the opening lap. That forced him onto the grass, where he spun, and fellow front-row starter Christian Rasmussen wide onto the oval.

That allowed Gold’s Juncos team-mate Kyffin Simpson to snatch the lead from fifth ahead of Petrov, who completed the race on a used set of tyres before the first caution period was brought out at the start of lap two.

On the restart, Petrov found his way past Simpson, before the caution flags were brought out again for contact between Turn 3 Motorsport’s James Roe and Pabst Racing’s Colin Kaminsky, eliminating the latter.

Shortly before the race was due to restart, Juncos’s Manuel Sulaiman came to a halt with a mechanical issue, delaying the return to green flag running.

While Petrov was able to hold onto the lead on the restart, team-mate Braden Eves was able to get by Simpson and pressured Petrov out front.

Meanwhile, climbing back up the order, Gold was making good progress into the lead gap and remained a threat for victory.

While the top four stayed in that order, Gold had the strongest pace of the lot as the race came towards its conclusion.

Petrov’s win is his first in almost a year, having most recently won at Mid-Ohio last July.

RP Motorsport’s Enaam Ahmed rounded out the top five, ahead of Abel Motorsports’ Jacob Abel, who made a last lap move on Miller Vinatieri Motorsport’s Jack William Miller, who pitted at the end of the formation laps.

Pabst’s Hunter McElrea was running in the top four, but a huge mistake soon after the second restart meant he dropped down the order, and he opted to pit to try and improve his fastest lap and influence his grid spot for the third race.

Rasmussen eventually finished ninth after pitting for repairs early on, dropping a couple of laps down the order, while Roe also retired late in the race.