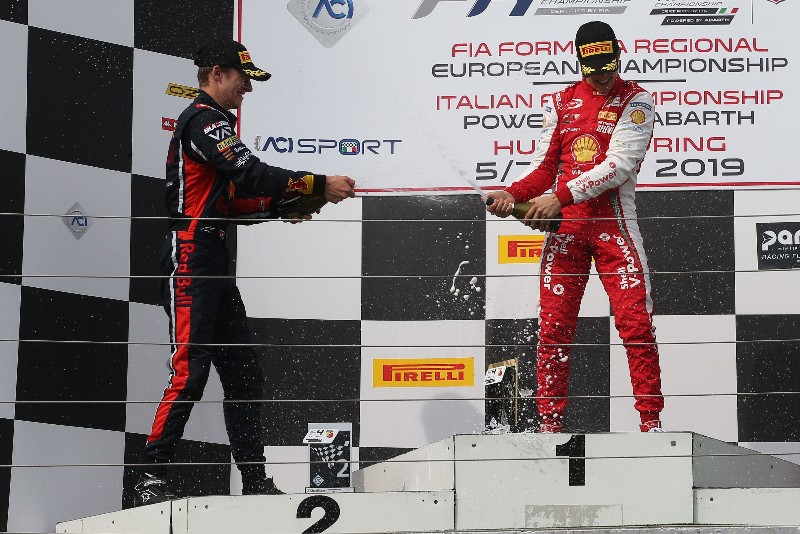 Gianluca Petecof and Dennis Hauger faced extreme heat, wind and rain in their battle for the win of the dramatic third Italian Formula 4 race at the Hungaroring.

Van Amersfoort Racing driver Hauger started the race from pole, and led away with ease while Petecof stalled and fell to 20th. A crash on the second lap led to the race being restarted using the original grid, putting Petecof back up to second.

“Pure mistake. I didn?t expect that level of grip at the [first] start,” Petecof told Formula Scout. “I misjudged the clutch bite point and stalled, but thankfully there was a red flag after so that helped us.”

In the time between the race stopping and restarting, the cloud level had dropped and the circuit was hit by high winds and heavy rain. At the restart it was Petecof who took the lead, with Hauger stalling.

“It was really difficult [conditions]. Thankfully we didn?t have rain in the middle of the race, apart from the last lap. Which I don?t know if it?s best or worse, because it was extremely difficult with Dennis behind me.

“There was ridiculous wind through the whole race, huge front wind in the straight. Of course it was destabilising the car in a few corners, but in the end to have a dry track for the majority of the race helped a little bit as well.”

Hauger also found the wind to be a complicating matter, which died down after a few laps.

“It?was quite different with the wind,” Hauger said. “Going into the first corner you could brake a bit later, but on the straights the car would move quite a bit because the wind was really hard. Bit difficult at the beginning but you just had to adapt to it. “

A crash between two backmarkers led to a safety car period, but it wasn’t until the late rainstorm that Hauger was able to pressure Petecof, getting alongside through several of the Hungaroring’s twisting corners.

“I had a good safety car restart, was able to pull the gap enough to have lets say a calmer last two laps,” said Petecof.

“But then I saw the rain coming, I tried to not lose too much time, but he caught me anyway. Really close, there was one particular point where we nearly touched, but thankfully we both finished the race.”

Hauger added: “I got up again [from stalling], and on the last lap I tried to go for a move that I saw. It was really risky with a driver in front of me.

“Of course I enjoyed the close fighting. But I think at one stage it got too close, and then I decided just to take the points instead because I didn?t want to end up in a crash.”