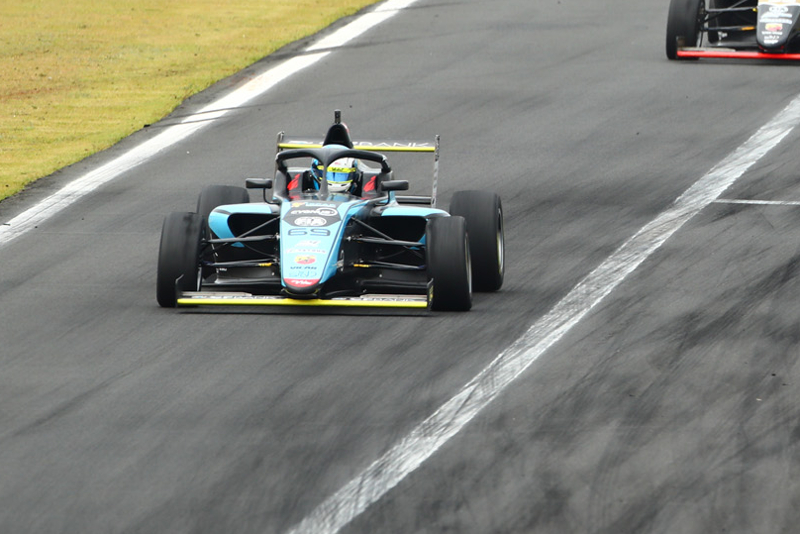 Brazilian Formula 4 redistributed cars around teams before the penultimate round at Goiania, but there was no change to the order as Pedro Clerot won, and became champion.

Clerot won race three of the weekend to claim the title in the inaugural season of the championship, and at an event that was postponed by two weeks due to a delay in delivery of tyres.

After two events apiece at Autodromo Velo Citta and Interlagos, it was the first trip to Goiania for the series and Cavaleiro Sports proved to be the team to beat with Felipe Barrichello Bartz claiming both pole positions in the qualifying session.

Rubens Barrichello’s nephew converted pole into victory in race one, leading every lap and defending a restart charge from Clerot after a red flag intervention. Clerot’s closest title rival Lucas Staico tried to keep his championship hopes with a late attack on Vinicius Tessaro and Ricardo Gracia to get into the final podium place.

Lucca Zucchini started on reversed-grid pole for race two, with Luan Lopes along him. But Cavaleiro Sports’ Nicolas Giaffone was the name of the race, starting from row two on the grid but taking the lead on lap two

Zucchini tried to remain on the top positions but lost pace on the final laps, being overtaken by Lopes, Barrichello Bartz and Tessaro. The later found time to pass Barrichello on the last lap to get the final podium place behind race-winner Giaffone and Lopes. Staico’s title hopes diminised as he retired halfway through the race.

Barrichello led from pole the opening laps on race race three, but had to serve a drive-through penalty for jumping the start. Clerot than took the lead and with his seventh win of the season became champion after defending a last corner charge from Tessaro. Alvaro Cho was third, with Ricardo Gracia and Nicholas Monteiro completing the top five.

Fernando Barrichello also had a drive-through penalty, for team members working on his car when the three-minute board was shown on the grid,

Brazilian F4’s final round is also delayed, from November 19/20 to December 9-11, and will now run at Interlagos rather than Brasilia due to renovation work at the latter.