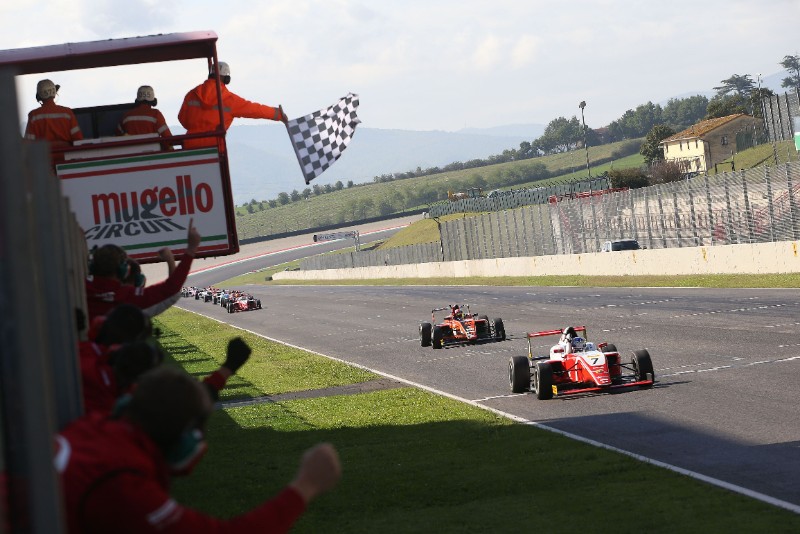 Paul Aron took a dominant victory in the first Italian Formula 4 race at Mugello as title rivals Dennis Hauger and Gianluca Petecof clashed while battling for the lead.

Poleman Hauger was able to build up a small gap in the first half of the race while Petecof took second from Prema team-mate Aron off the line.

The trio ran in formation for a number of laps before the safety car was brought out when Filip Ugran was left stranded in the gravel after clipping the front wing of Lucas Alecco Roy.

On the restart, Petecof pulled alongside Hauger twice, and on the second occasion he slid into the side of the leader, forcing both wide and Hauger into a spin.

Petecof rejoined in third, behind Antonelli Motorsport’s Lorenzo Ferrari, but Hauger dropped down the order and out of the points.

The incident left Aron free at the front of the field. He gradually extended the gap to Ferrari, before another safety car in the final three minutes of the race bunched the field up again.

Mucke Motorsport’s Joshua Durksen had been running fourth, close behind the battling Petecof and Red Bull junior Jonny Edgar, when he fell into the gravel and was unable to get going again.

The race was not restarted and Aron followed the safety car to his second victory of the season. Ferrari, whose previous best finish was ninth, beat Petecof to second.

Petecof was then handed a 10-second penalty for contact with Hauger, dropping him to 23rd place. Jenzer Motorsport’s Edgar was promoted onto the podium, producing the first all-rookie podium of the season.