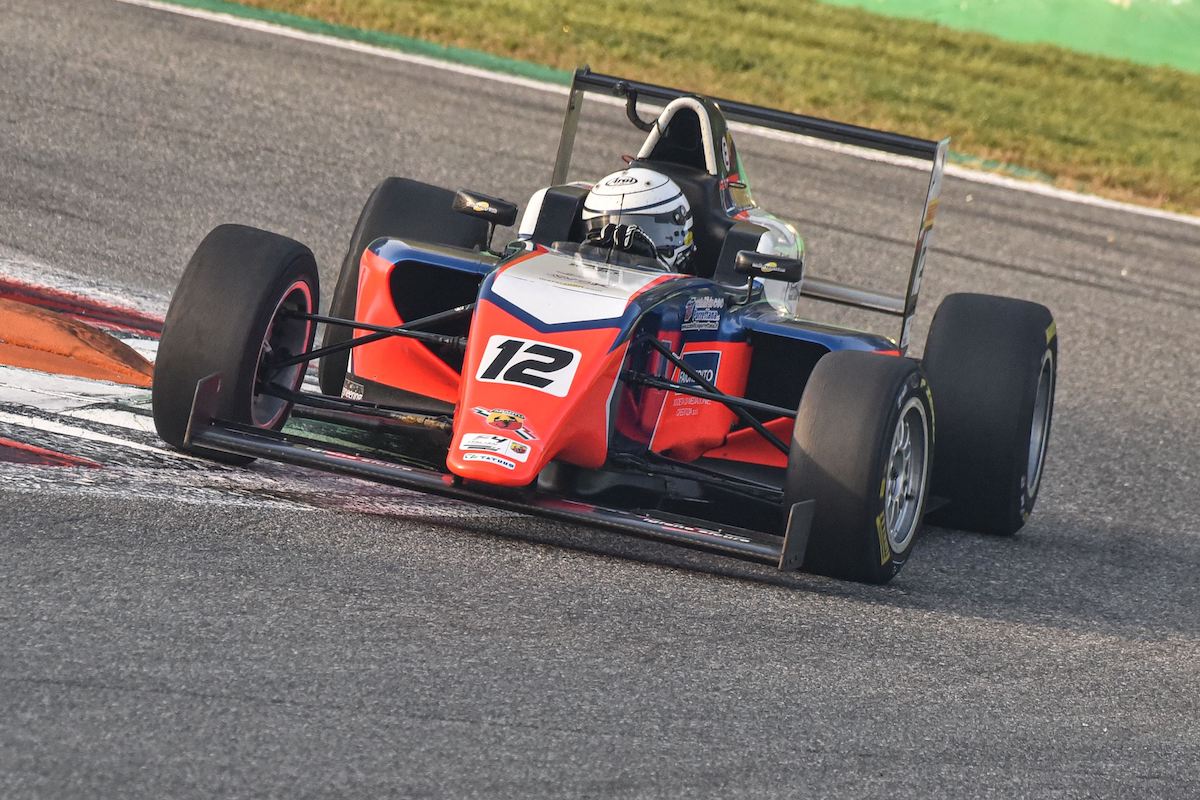 Lorenzo Patrese claimed a qualifying hat-trick at Monza as he racked up his first pole positions in Italian Formula 4.

Patrese, son of six-time Formula 1 race-winner Riccardo, had never previously qualified higher than eighth driving for the AKM Motorsport team, but built on the promise shown when he set joint-fastest time in the pre-event test at Monza on Thursday.

In the first qualifying session he claimed top spot with six minutes remaining and went on to set two laps that were even faster to make sure he was never headed, finishing up with a 1m53.206s.

It was a similar story in the second session. He became the first driver to go into the 1m52s, with Sebastian Montoya, Andrea Kimi Antonelli and Tim Tramnitz all getting within a tenth of a second but not able to match his time.

Patrese then found a further improvement 1m52.701s lap just before the chequered flag, ensuring he stayed out of reach of Leonardo Fornaroli, who crossed the line 0.122s slower a few seconds later.

That last effort also ensured Patrese’s previous best would end up as the best second-fastest lap, giving him pole position for race three as well.

Patrese was one of many drivers to have laptimes deleted for exceeding track limits at the final corner. Series champion Ollie Bearman was also affected in the first session but recovered to take second place, 0.102s down off pole.

Erick Zuniga was another unexpected star during the first session, and would have been second had he not had a time deleted. His fourth place just behind Mucke Motorsport team-mate Joshua Durksen was still a personal best in Italian F4.

Antonelli enjoyed his best qualifying showing yet on his third weekend in car racing. He was fifth in the first session until a late lap deletion dropped him to eighth behind Prema team-mate Montoya as well as Tramnitz and Josh Dufek.

He then took fourth in the second session, inbetween Montoya and Tramnitz, but set a final flying lap good enough for him to join his former karting team-mate Patrese on the front row for the last race of the season.

Fornaroli, the driver with the best chance of reeling in Tramnitz for second place in the championship, could only manage 11th place in the first session for Iron Lynx. But his performance in the second session netted him not only second on the grid for race two but also third for race three, one place in front of Tramnitz.

Kirill Smal fared even worse in first qualifying, mustering only 23rd, but recovered to eighth in Q2 and moves up to fifth on the race three grid, just in front of Prema team-mate Hamda Al Qubaisi, who qualified inside the top 10 for all three races.