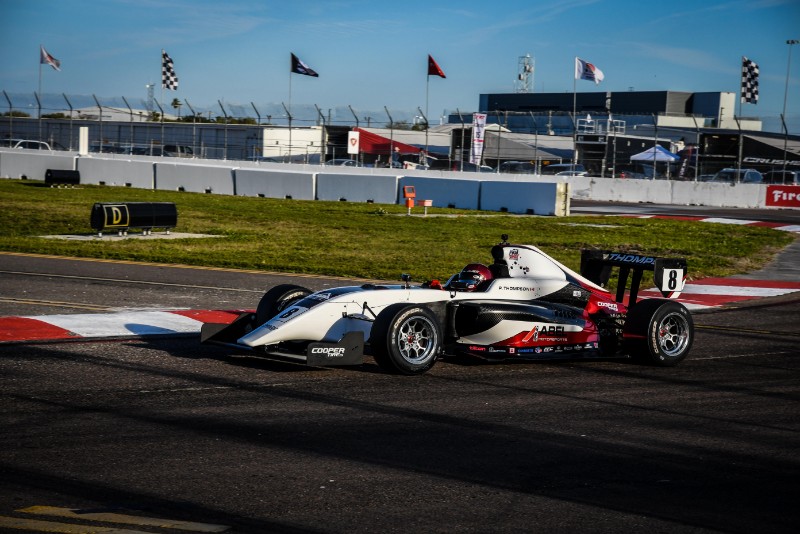 Parker Thompson won the opening race of the 2019 Indy Pro 2000 season in St. Petersburg from pole position after a battle with USF2000 graduate Rasmus Lindh.

Thompson, who was IP2000 runner-up last year and announced his drive with Abel Motorsport earlier in the week, lost the lead at the start of the 25 lap race after Juncos Racing’s Lindh made a better start from second place.

It took five laps to reel Lindh back in, by which point yellow flags had been brought out to retrive the stricken RP Motorsport car of Kyle Kirkwood after he sustained wing damage on the opening lap.

Before the second caution period on lap 18, Thompson was able to retake the lead from Lindh. He was then able to keep ahead when the race returned to green and was untroubled until the chequered flag.

Lindh’s team-mate Sting Ray Robb finished third to complete the podium and was only 0.467 seconds behind. Robb had briefly lost third on lap nine to Moises de la Vara at Turn 1, but was able to take back a place a lap later.

The Exclusive Autosport duo of Danial Frost and Nikita Lastochkin claimed fourth and fifth after they started in sixth and eighth respectively. Lastochkin was able to hold off Moises de la Vara on the final lap, with the DEForce Racing driver settling for sixth.

Antonio Serravalle finished seventh and just ahead of Phillippe Denes and Jacob Abel, while Parker Locke completed the top 10. Kory Enders was the only other driver alongside Kirkwood to retire after he stopped at the entry to Turn 10 in the second half of the race.