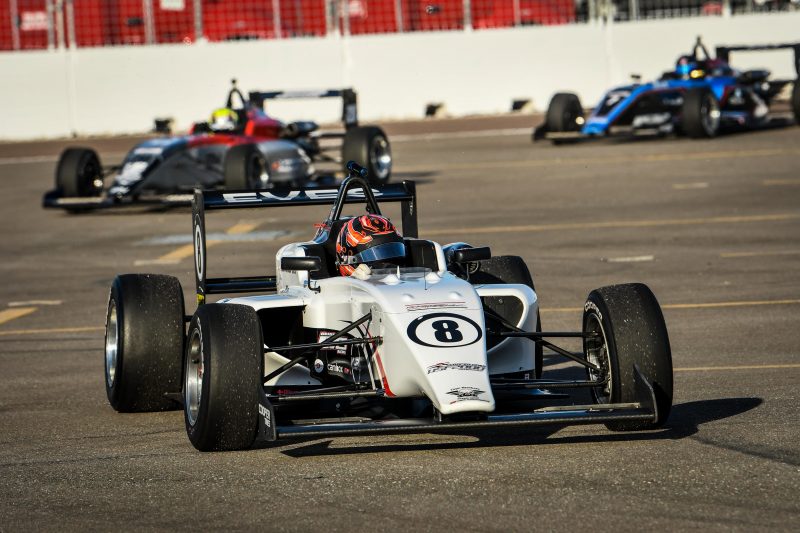 Cape Motorsports’ Braden Eves picked up the first victory of the 2019 USF2000 season in a time-truncated race at St. Petersburg.

Eves, driving the car that won the 2018 title, led away from pole until a first corner crash put a temporary pause on proceedings. Legacy Autosport’s Alex Baron had made brief tyre-to-tyre contact with another driver,?sending him flying over the top of Hunter McElrea and Zach Holden and bringing out the red flags.

Under the pace car leading the field back to the pitlane, Nate Aranda was pitched into the barriers at the start of lap three, ending his race too.

Christian Rasmussen was a big gainer on the first lap, moving from ninth to fourth, which positioned him behind Eves, DEForce Racing’s Manuel Sulaiman and Pabst Racing’s?McElrea. Yellow flags were out almost immediately after the restart, and amidst the continuing chaos there was a frantic battle for fourth between Ramussen and BN Racing’s Zach Holden.

Holden looked to be the man with the most speed, picking up the pace to pressure Rasmussen while Eves built up a lead when uninterrupted by yellow flags.

Although the battle for second behind was close, overtaking was made difficult by the frequent appearances of yellow flags, and after the last caution period there was a one lap dash to the finish.

Eves held off Sulaiman to win, while McElrea soaked up the pressure from behind to complete the podium.?

Pabst’s Bruna Tomaselli held onto her sixth position from qualifying, while Cape’s Darren Keane sliced through the field from 19th to finish seventh.