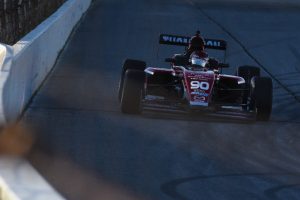 Parker Thompson extended his Pro Mazda championship lead with a third win of the season at Lucas Oil Raceway, while two of his title rivals crashed out.

The three were a step ahead of the rest, with their most trying moments occurring when trying to lap traffic.

Thompson led throughout, and took his first oval win by 0.2213 seconds.

Cunha was the man in second, getting unnaturally close to Thompson at the end due to traffic, with Megennis completing the podium a further nine seconds behind.

The Tatuus PM-18 cars found it difficult to overtake at the narrow and short LOR oval, and the only two changes of position in the first half of the race occurred between David Malukas and Harrison Scott for fourth.

That battle got overheated at the halfway point of the race, as Malukas’s front-right tyre went into Scott’s left-rear entering Turn 4. Scott was span into the wall, while Malukas managed to make it almost to the timing line.

Old USF2000 rivals Rinus VeeKay and Oliver Askew inherited their fourth and fifth positions, although Askew then lost out to Sting Ray Robb, who had been fighting not to be lapped down in ninth earlier in the race.

Lodovico Laurini finished seventh for RP Motorsport, the team and driver’s first ever oval race, with Antonio Serravalle (Exclusive), Nikita Lastochkin (Cape) and Charles Finelli (BN Racing) rounding out the top 10 as the only other finishers.

BN Racing’s Kris Wright and Pelfrey’s Andres Gutierrez did not enter, although Gutierrez still sits in ninth in the standings.