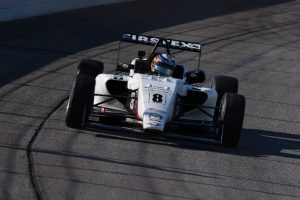 Kyle Kirkwood dominated the Freedom 75 at Lucas Oil Raceway, the only oval race on the USF2000 calendar.

The Cape Motorsports driver narrowly beast Pabst Racing’s Rasmus Lindh to pole, but the Swede has no answer to Kirkwood’s pace in the race.

In the caution-free first half of the race Kirkwood stretched out a lead of over four seconds, before championship rival Alex Baron put his Swan-RJB Motorsports car into the wall at Turn 3 when attempting to lap Russell McDonough.

The Frenchman retired immediately, and Kirkwood was left to fend off Lindh, his Pabst team-mate Kaylen Frederick and ArmsUp Motorsport’s Keith Donegan, on his most impressive performance to date, on the first restart.

Donegan was the weakest of the frontrunners on the restart, dropping to sixth, but had another chance to put that right when the race was neutralised again shortly after.

Zach Holden and Julian Van der Watt had interlocked wheels during contact, and it took a significant number of laps for marshals to detatch the two cars. Once they had completed that task, both drivers were able to return to the pits.

The caution periods meant the race became a timed encounter of 30 minutes, and Kirkwood ensured victory would be his with a brilliant restart that included setting the fastest lap of the race.

Frederick jumped from fourth to second, although it took a lap of side-by-side running to move past Lindh, with Pabst team-mate Lucas Kohl finishing fourth.

The combination of victory, pole, fastest lap and all laps led means Kirkwood got the maximum amount of points available, and now leads Baron by 44 points in the standings. Sierra is a further 13 behind.