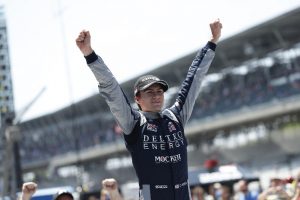 Colton Herta took the biggest win of his career in the 2018 Freedom 100 at the Indianapolis Motor Speedway, although the victory could’ve gone to any one of four drivers.

There were over 100 overtaking manoeuvres in the 40-lap race, 20 of which were for the lead.

Herta led 10 laps, with his decisive move for the lead coming on the last lap. The Andretti Steinbrenner Racing driver took first place from Santiago Urrutia on the inside at Turn 1, with Patricio O’Ward going on the outside for second.

O’Ward then got caught in the dirty air of Herta through the first two turns, meaning the leader had a crucial gap of a few car lengths going into Turn 3. The slipstream meant O’Ward was back on his Andretti team-mate’s tail entering the pit straight, but he pulled out of the wake at the wrong moment and ended the race almost three hundredths behind.

The Mexican had spent the early parts of the race avoiding the lead battle in an effort to save his tyres and avoid getting involved in a potentially race-ending collision.

In the second half he upped his aggression, and led for two laps just a few tours from the end. He was unable to run as high a line as the likes of Herta and Urrutia though, and second place means he loses the championship lead to Herta by four points.

It was his first experience of the IMS oval, and his first oval race in an Indy Lights car, meaning he topped the rookie classification.

Poleman Dalton Kellett made it an Andretti lock-out of the podium, and also led the most laps of anyone. The majority of his 17 laps up front were in the first half of the race, and on several occasions in the second half he was swamped on both the inside and outside for position.

He timed his last lap attack well though, taking his third successive third place in the Freedom 100.

Urrutia got bumped down to fourth by Kellett’s final second move, but it was still the best ever finish in the race for the Belardi Auto Racing driver. The Uruguayan led eight laps in total, and like Herta was happy to ride it high on the outside when going for the lead.

Ryan Norman finished fifth, just three tenths off the winner, but may have finished higher had he not made a strategy miscalculation. Like O’Ward, he spent the first half of the race conserving his tyres, but was then left with too much time to make up in the second half to challenge for the win.

Aaron Telitz was an anonymous sixth for BAR, with Davey Hamilton Jr and Victor Franzoni completing the field one and two laps down respectively.

Franzoni led early on, but dangerously low tyre pressures prompted his Juncos Racing team to call him in to the pits to change tyres just before halfway distance.

Championship returnee Hamilton was mostly way off the pace, yet surprisingly took fastest lap, which was set on the third tour.