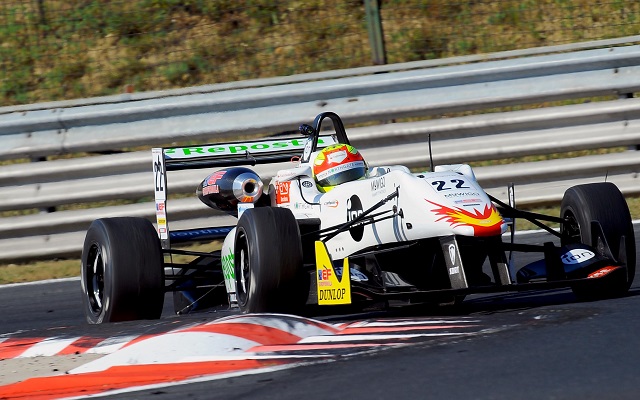 Campos Racing?s Alex Palou took his second with of the 2014 Euroformula Open season with a great drive in race two of the round at the Hungaroring.

Pole sitter Artur Janosz got the jump off the line, with Palou battling with front row starter? Sandy Stuvik for second.

Despite pressure, Spaniard managed to clear the Thai racer into turn two and then eventually set off after Janosz.

Palou put Janosz under increasing pressure over the subsequent lap and eventually got through when he dived to the inside at the chicane on lap two. This allowed the Spaniard to pull away from the Pole with relative ease. Further back, championship leader Stuvik pulled into the pits from third with suspension damage promoting Konstantin Tereschenko to third.

Despite a safety car period kicking off eight laps into the race due to Dzhon Simonyan‘s crash, Palou was hardly under pressure for the remainder of the event and took the checkered flag to claim an easy first.

Janosz settled for second and moved into the championship lead as a result of his teammate Stuvik’s retirement. Tereshchenko held on to third just ahead of BVM Racing?s Christopher Hoher and EmiliodeVillota Motorsport?s Yu Kanamaru.

Andres Saravia continued his best weekend in the championship with sixth ahead of Yarin Stern. Nicolas Pohler was eight, narrowly beating Gerardo Nieto and Sean Walkinshaw in ninth and tenth.