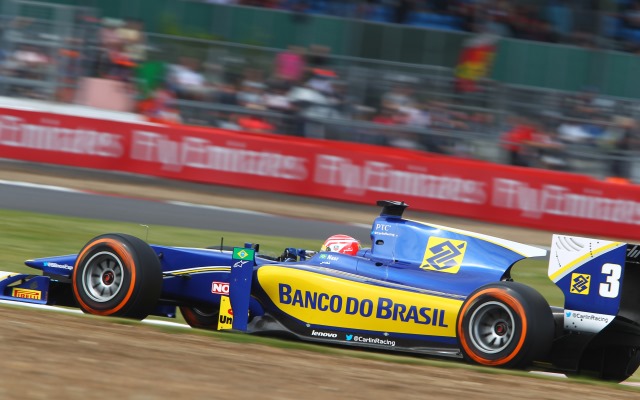 Felipe Nasr scored his third GP2 win in the space of four rounds with a claim drive to victory in the sprint race at Silverstone.

Nasr got a good start from second to pull into the lead as pole-sitter Stephane Richelmi dropped back and fellow Monegasque driver Stefano Coletti came forward from fifth to second with one of his traditionally strong getaways.

Coletti kept within a second of Nasr in the opening laps but later fell away, with Nasr eventually winning by 4.3 seconds.

Coletti suffered from a misfire but did enough to keep second, 1.3s ahead of a battle between Johnny Cecotto and Jolyon Palmer. Palmer cleared team-mate Richelmi and Julian Leal with bold moves in the Arena section, but could not do anything about Cecotto. Nasr’s victory cuts Palmer’s championship lead from 45 to 38 points.

Leal and Richelmi completed the top six, with the latter doing enough to keep feature race winner Mitch Evans at bay. Marco Sorensen completed a double points-scoring GP2 debut by stealing eighth and the final point away from Stoffel Vandoorne when the Belgian ran deep at Village on lap six. Adrian Quaife-Hobbs completed the top ten.

After retiring with a mechanical issue from the feature race, yesterday’s pole-sitter Raffaele Marciello‘s nightmare continued when, after a good start, he was knocked off into the gravel at Abbey after contact on his inside between Artem Markelov and Sergio Canamasas.