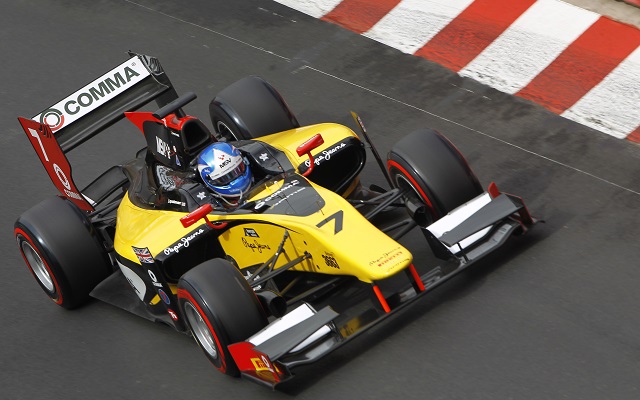 The Briton lost out to Mitch Evans off the line, settling for second into turn one, but soon managed to wrestle the lead back and stayed at the front for the remainder of the race.

Behind him, there was an extremely hectic, incident-filled event, which saw the order shaken up on multiple occasions.

Unlike last year, the GP2 grid managed a mostly safe opening lap around the streets of Monte Carlo, as Evans assumed the lead ahead of Palmer and Stephane Richelmi.

Evans wound up leading the subsequent restart, but would shortly run out of grip on his super soft tyres, which allowed Palmer to catch up with him and pull off a forceful overtaking move for the lead into turn one.

The Kiwi appeared set to drop back further, as he wound up holding up Richelmi and the others over the subsequent laps, but the track action was cut short after a series of incidents in the Hotel hairpin.

First, it was Alexander Rossi who forced Hilmer’s Daniel Abt into the wall on exit of the hairpin, bringing out local yellows and subsequently earning a drive-through penalty.

A couple of laps later, Austrian Rene Binder made a clumsy move on his teammate Andre Negrao, leaving the Brazilian turned around in the corner. Negrao’s Arden effectively blocked off the track, creating a massive traffic jam and forcing a red flag.

The track activity would not resume for a while, as many cars struggled to get to the grid, having went into safe mode to prevent overheating the engine.

Evans and those on similar strategies were given a breather, as they were allowed to change tyres on the grid – but it was Felipe Nasr and a select few other drivers who benefited the most, having gotten their mandatory stops out of the way before the stoppage and not having to visit the pits again.

The race finally restarted half an hour later under the safety car and when the track went back to green, Palmer duly put the hammer down, beginning to lap at an immense pace compared to his opponent. With Evans holding up Richelmi and Johnny Cecotto, the Brit built up an eight-second gap out front, when Julian Leal went into the barriers at Nouvelle Chicane, causing yet another safety car.

An expected flurry of pitlane activity followed, with Palmer taking his mandatory stop in the lead. The DAMS team managed a quick tyre change, but Palmer wound up visibly knocking a tyre out of the way on exit, allowing it to briefly stroll freely down the pitlane. As of this writing, there has been no official investigation on the matter.

Palmer emerged ahead of the non-stopping Simon Trummer, with Evans narrowly coming out ahead of the strategy beneficiary Nasr. However, all of them were a position down on Stoffel Vandoorne, who was perplexingly not called into the pits from fifth place and was now in first, yet to make his mandatory stop.

The Belgian kept the lead off the restart with lots of activity going on in the pack behind. For a brief few laps, local racer Stefano Coletti was the star of the show, pulling off several incredible overtakes around the infamously tight circuit. He found his way past early stopper Sergio Canamasas, overtook Nasr into the final turn and then did the same thing with Evans.

However, Coletti’s charge came to a close when an analogous move on Trummer left both of them in the barriers.

As the race went on and the countdown switched to time limit from laps, Vandoorne came into the pits, forfeiting the lead and rejoining outside of the points. Palmer began to pull away from Evans in the lead, but, a few minutes later, started to struggle for pace, allowing the Kiwi to close in lap after lap.

While the ending of the race was marred by yellow flags in and after the Nouvelle Chicane (brought on by a misjudged overtaking move from Binder as the Austrian put Artem Markelov out of the race), Evans did manage to catch up with Palmer, entering the final lap less than a second behind and with Nasr right on his heels.

The trio were very close together on the final lap, but Palmer managed to safely hold on to the victory. Evans kept Nasr at bay to take second, maintaining his 100% podium record at Monte Carlo in GP2.

Cecotto took fourth, having overtaken his Trident teammate Canamasas, who recorded his best result in the series in sixth.

Arthur Pic, another early stopper, recorded sixth, ahead of Rio Haryanto and Richelmi, who is set to start tomorrow’s race from reverse-grid pole.

Adrian Quaife-Hobbs and Tio Ellinas rounded out the points.