Palmer makes it three from three at Snetterton 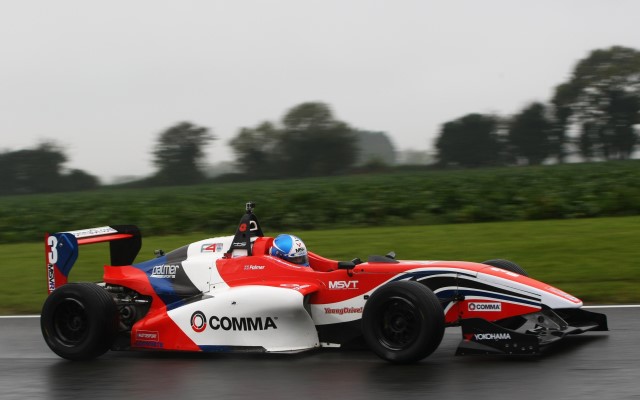 Will Palmer has claimed his third victory from as many races in the BRDC F4 Winter Championship with a 15-second win in wet conditions on Sunday morning.

In wet conditions, Palmer took the lead away from pole-sitter Gaetano di Mauro off the start and built up a good early lead before the safety car made an appearance after a spin by Fernando Urrutia.

After the restart, Palmer’s advantage over di Mauro stood at just under five seconds going onto the final lap, but a moment cost the Brazilian over ten seconds.

Despite that time loss, di Mauro was still able to finish in second place, with third-placed Rodrigo Fonseca finishing 23 seconds behind the winner in the nine-lap race.

Zubair Hoque had moved up into third place early on but spun to the back of the pack as Jordan Albert took the position. Albert’s podium chances didn’t last much longer though, with an off promoting Connor Jupp.

Jupp however had a ten-second penalty for being out of position at the start. He would fall behind Fonseca and Harrison Newey anyway before the flag, and was classified as the final finisher in sixth behind Hoque.

Palmer has the chance to make it a clean sweep in the final race, which he starts from pole courtesy of the fastest race three lap.