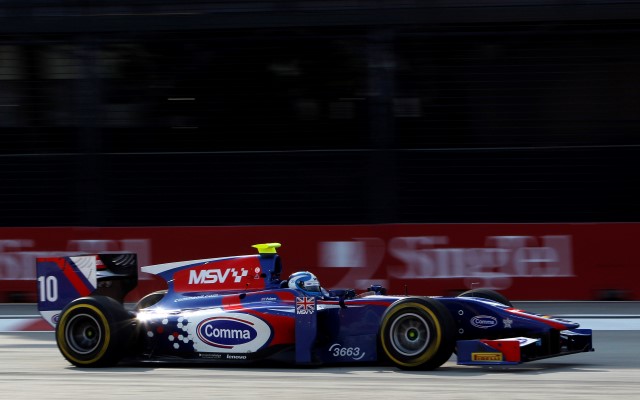 After topping the earlier practice session, Palmer held second place behind Nasr during the first half of the session, which was red-flagged at the midway point after Daniel Abt came to a halt on track and debutant Gianmarco Raimondo then crashed into the barrier under the grandstand at turn 18.

Championship leader Fabio Leimer had moved into top spot shortly before the stoppage but Palmer used a purple sector two to set the fastest time with five minutes left.

Nasr was able to move up into second place, 0.252 seconds behind Palmer. Leimer finished up third with Alexander Rossi in fourth having been a pole threat since he posted the first flying lap of the session.

Stephane Richelmi was the last man within a second of Palmer in fifth with Tom Dillmann recovering from an excursion down an escape road to claim sixth. Sergio Canamasas took advantage of the pace in his Caterham machine to secure seventh with James Calado in eighth. Marcus Ericsson was ninth but could have gone better had he not been baulked by a gaggle of cars in the final sector.

Leimer’s chief rival Sam Bird was another to be impeded towards the end of the lap, with Johnny Cecotto – with whom Bird clashed in Malaysia at the start of the season – appearing to twice get in Bird’s way as he could manage only tenth.

Mitch Evans will have to start from the back after crashing into the barriers at the new turn ten during the early part of the session.

World Series by Renault to race at Jerez in 2014