PaddockScout.com briefs you on the weekend ahead, focusing around the prestigious Masters of Formula 3 at Zandvoort in the Netherlands…

First run in 1991, the Masters of Formula 3 at Zandvoort has long been considered the premier Formula 3 event in Europe, attracting some of the stars from the various series across the continent. David Coulthard won the first ever running 20 years ago, and more recently Lewis Hamilton, Paul di Resta and Nico Hulkenberg have all won the event. Last year Valtteri Bottas became the first driver to win on more than one occasion, winning in two consecutive years.

This year the event forms the fourth of five events in the inaugural FIA Formula 3 International Trophy. Having won both the Trophy-counting races at the season opener at Hockenheim and then both of the Trophy races at the British championship round at Spa two weeks ago, Roberto Merhi is well out front in the standings. His four wins as well as his runner-up place at Pau means he has racked up 118 points. His nearest rival is Marco Wittmann, winner in Pau, who only has 43 points. He missed out on plenty of points at Hockenheim, as despite finishing both races in second place he was not registered for the Trophy at the time, only joining up in time for Pau.

That all means that Merhi is highly likely to wrap up the Trophy this weekend, regardless of his result. Thing is, he starts the event as the overwhelming favourite. He arrives in the Netherlands having won four races in the last two weeks. As we said, he won two of the three British F3 races at Spa and then won twice in the F3 Euro Series round at the Nurburgring last weekend. The only thing counting against him is that he did not win during the Euro Series meeting at Zandvoort back in May.

Merhi’s fellow Spaniard and Prema teammate Daniel Juncadella will be one of his nearest challengers, having picked up his fourth win of the Euro Series season last weekend. The team is running a third car this weekend for British series regular Pipo Derani, who finished sixth at Pau.

Wittmann will be a contender for Signature, having won a race in the Euro Series meeting at the Dutch track. Expect his teammates Laurens Vanthoor, Daniel Abt and Carlos Munoz to be towards the sharp end, but probably not quite fighting Merhi for the win.

Nigel Melker will be going for victory on home soil, aiming for a repeat of his Euro Series win there. He is joined at Mucke Motorsport by regular teammate Felix Rosenqvist and another British F3 regular from Britain, Lucas Foresti. 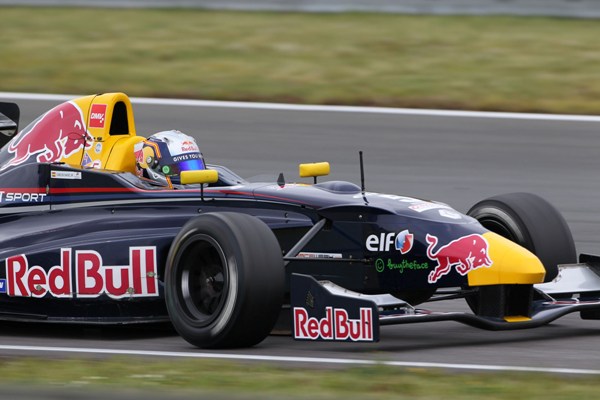 The Formula 3 contenders won’t be the only young guns taking to the track at Zandvoort this weekend, with both Formula Renault and Formula Ford races part of the support bill. The sixth race weekend of the Formula Renault 2.0 North European Cup takes place, with Carlos Sainz Jr. leading the way. Fellow Red Bull Junior Daniil Kvyat lies second in the standings, with the duo having won nine of the 12 races so far.

Just behind Kvyat is Robins Frijns, who will hope to ruin Red Bull’s party at his home track. He missed the last round of the season at Oschersleben, with the Eurocup his main focus after winning the Formula BMW Europe title last year. His fellow FIA Institute Academy member Stoffel Vandoorne will be chasing his first win in the category. British championship regulars Josh Hill and Jordan King make guest appearances, just as they did in Germany.

The fourth and final meeting of the Formula Ford EuroCup also takes place at Zandvoort, with Britain’s Scott Malvern having dominated proceedings both at home and on the continent this year. He will be hoping to claim the honours for the fourth time, as well as extend his lead in the British championship. A contingent of Dutch racers will be out to stop him.

Elsewhere, the German Formula 3 Cup races at the Red Bull Ring in Austria. New Zealand’s Richie Stanaway leads the way currently after winning seven of the 10 races so far, but Dane Marco Sorensen lies 18 points adrift after finishing on the podium in all but one race. Reigning Formula Renault UK champion Tom Blomqvist won last time out at Zolder, and is fourth in the standings. Also on the bill at Spielberg will be ADAC Formel Masters, the series won by Stanaway last year. Germany’s Pascal Wehrlein has won seven races so far, with British-born Dane Emil Bernstorff his nearest challenger in the standings.

Keep an eye on our Facebook and Twitter accounts over the weekend for the latest news and results, and look out for the PaddockScout Weekend Roundup on Monday for a look over all of the action.

From Cyprus via a talent contest: Tio Ellinas