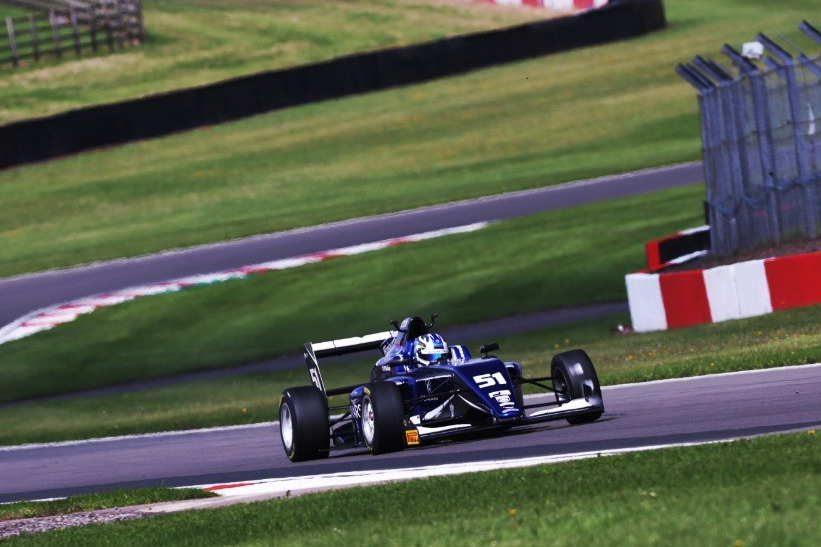 Zak O’Sullivan and Reece Ushijima took a pole each for the final round of the GB3 championship at Donington Park after a late red flag halted qualifying.

Carlin’s O’Sullivan clinched the title shortly before qualifying began as it was confirmed that 21 cars would participate, and with 23 required for enough additional points to be available from positions gained in the final race of the weekend for Chris Dittmann Racing’s Ayrton Simmons – if he were to win all three races – to steal the title from a non-scoring O’Sullivan.

By going fastest overall in qualifying, O’Sullivan will start from pole for race one. Hitech GP continued its strong form from testing, with Horsten second quickest ahead of team-mates Ushijima and Sebastian Alvarez.

Ushijima and Horsten will line up on the front row in race two on Sunday, the grid determined by drivers’ second-best laps, with O’Sullivan and Alvarez on row two.

O’Sullivan set the first representative laptime of qualifying with 10 minutes remaining in the session, before Horsten and then Ushijma bettered his effort, the latter dipping under the pole time from the Donington round earlier this season.

Horsten reclaimed top spot before O’Sullivan found a further 0.2s to take back the advantage.

Ushijima went fastest again, with Horsten improving to move into second, but the pair were beaten in the closing stages by O’Sullivan before the session was halted with two minutes remaining after Douglas Motorsport’s Reema Juffali spun into the gravel.

Arden’s Roman Bilinski was fifth fastest for race one, ahead of Carlin’s Christian Mansell. Fortec Motorsports’ Roberto Faria and Simmons, who are both still in battle for second in the championship with Mansell, were seventh and eighth.