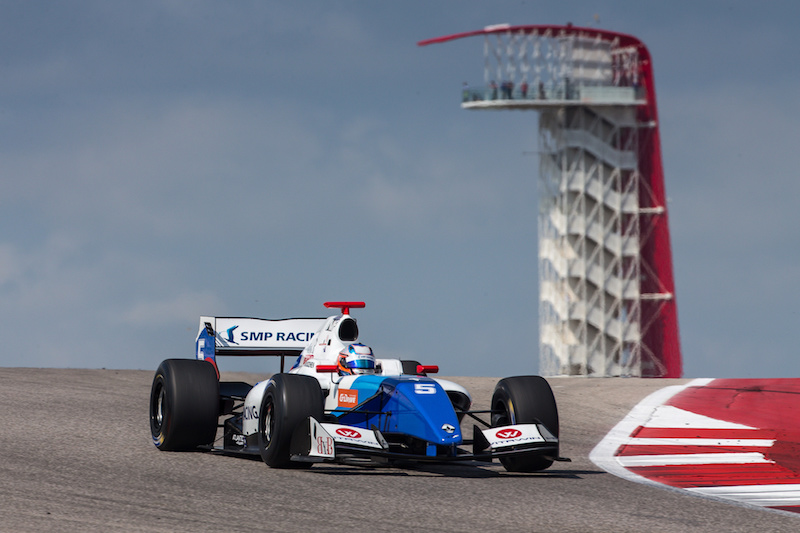 Egor Orudzhev kept his championship hopes alive with his second World Series Formula V8 3.5 win of the season in race two at Austin?s Circuit of the Americas.

The SMP Racing driver finished more than five seconds ahead of Alex Palou after passing the pole-sitter in the pits.

Orudzhev, third on the grid, made a strong start to pass Pietro Fittipaldi on the opening lap. Fittipaldi tried to fight back, allowing championship rival Matevos Isaakyan to join the battle, but locked up and ran wide through the gravel, coming to a stop in the barriers.

It was a disastrous race for Lotus. Fittipaldi?s team-mate Rene Binder was unable to make it off the grid for the formation lap. He joined the race at the start of lap two and, though he did take the fastest lap of the race, was never able to improve his position.

Orudzhev closed the gap to Palou, but the Spaniard kept the race lead until taking his mandatory pit stop. Orudzhev pitted much later, after building up a 27 second gap to Palou, and emerged from the pit lane just ahead of the Teo Martin driver.

Palou couldn?t keep up with Orudzhev, finishing 5.418s behind, but didn?t have to worry about defending his position.

Isaakyan, who spent the first half of the race third, came under pressure from Diego Menchaca after the pit stops. He battled to keep the Fortec driver behind him but Menchaca eventually found a way past. By this point Palou was out of reach, and Menchaca had to settle for third.

Roy Nissany, Alfonso Celis, and Konstantin Tereshchenko joined Isaakyan in a battle for fourth. Nissany won the fight whilst contact between Isaakyan and Tereschenko allowed Celis to take fifth.

Isaakyan eventually finished sixth ahead of Yu Kanamaru, who started from the pits, and Tereschenko.