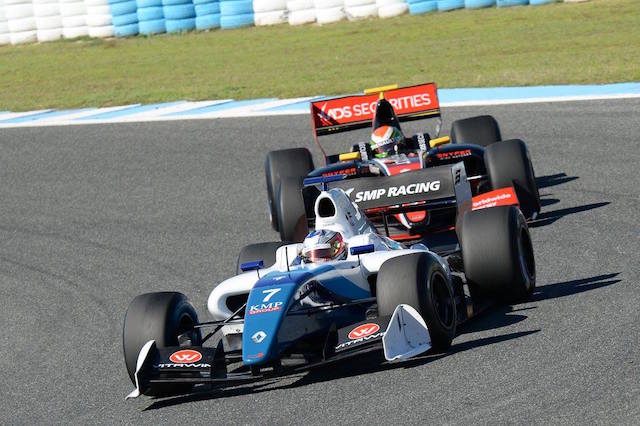 Another flying start sent Egor Orudzhev?on his way to victory in the second Formula V8 3.5 race at Jerez ahead of?Louis Deletraz, who takes the points lead going to the final round.

Deletraz had edged out?Jack Aitken for pole position by three thousandths of a second, a year after losing the Eurocup Formula Renault title to the Briton at the same circuit.

None of the drivers on the front two rows made particularly good starts though, and Orudzhev repeated his trick from the Sunday race at Monza to come from fifth to lead into the first corner.

Deletraz remained within a second of Orudzhev over the first 10 minutes before the Russian pitted and was serviced in impressively quick time by the Arden crew.

Fortec driver Deletraz set a strong pace in clean air over the next four laps?before?he pitted, but his stop was not as quick and he rejoined behind his rival.

Orudzhev had 2.6 seconds in hand at the end of Deletraz’s out lap, and although the Swiss racer reduced this to under two?second for a while,?he never seriously challenged the SMP Racing-backed driver, who becomes the first to win four times this season and is within nine points of salvaging third in the standings.

Second was still a good result for Deletraz in the context of rival?Tom Dillmann‘s struggles.

The French single-seater veteran qualified a miserable 13th, and although he gained some places in the early stages – mostly through problems for others – his lack of pace was such that?Rene Binder could stay out in clean air, pit late and comfortably jump him for seventh place.

Deletraz briefly held the points lead on Saturday before being penalised for the contact that ended Dillmann’s race, but now takes?a three-point advantage to next weekend’s final round in Barcelona.

Matthieu Vaxiviere?finished the race in a distant third after seeing off a mid-race challenge from Aitken, whose getaway was not as bad as in race one.

Beitske Visser?followed fellow third-row starter Orudzhev’s lead to briefly hold third at the first corner before being passed by Vaxiviere and Aitken.

In her strongest performance in the series to-date however, she spent the last 15 minutes of the race within half a second of Aitken, but there was no opportunity to pass.

Race one winner?Matevos Isaakyan joined fellow rookies Deletraz and Aitken at the top of the times in qualifying but slipped from third to seventh?at the start behind?Pietro Fittipaldi, who lost ground in a?slow early pitstop.

Roy Nissany completed a poor weekend by stalling at the start and trailing home 14th.?Aurelien Panis ran eighth before stopping at the side of the track seven minutes in.