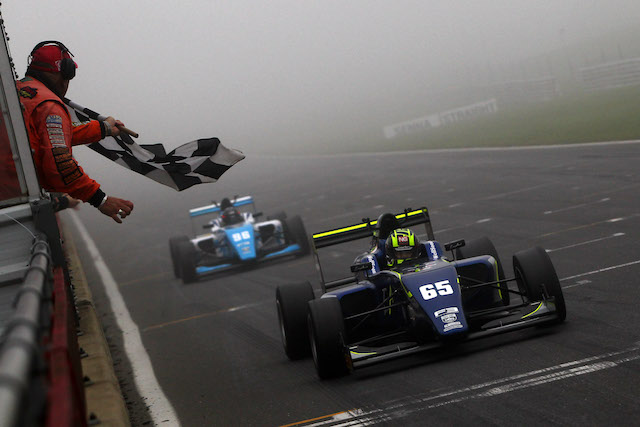 Enaam Ahmed clinched the BRDC British Formula 3 Autumn Trophy with another win on a disrupted second day at Snetterton.

Heavy fog wreaked havoc with the schedule, forcing the cancellation of qualifying in the morning and then the fourth and final race later at the end of the day.

Race three did go ahead, with grid positions set by the overnight standings, putting Ahmed onto pole position.

He held the lead through the first corners, under attack from?Dan Ticktum.

There was contact between the pair at Agostini, causing Ticktum to spin off and out of the race with damage.

After the restart,?Joey Mawson remained within seventh tenths of Ahmed, but the Carlin driver held on to take his second win of the weekend, and he was confirmed as champion when the meeting was abandoned shortly afterwards.

ADAC F4 champion Mawson would have started the final race from pole after posting the fastest lap, but he still finished the Trophy in second place for Douglas Motorsport.

Jamie Caroline?made it on to the podium in the second Douglas-run car after a strong start from sixth on the grid, ahead of?Fortec’s?Callan O’Keeffe?who finished up third in the standings.

United States F4 champion?Cameron Das?scored a weekend’s best of fifth, as did Sasakorn?Chaimongkol in sixth.

Starting from the back as a guest ineligible for points,?Marcus Armstrong?finished seventh while driving for a fastest lap, securing a place on the front row for the finale that never was.