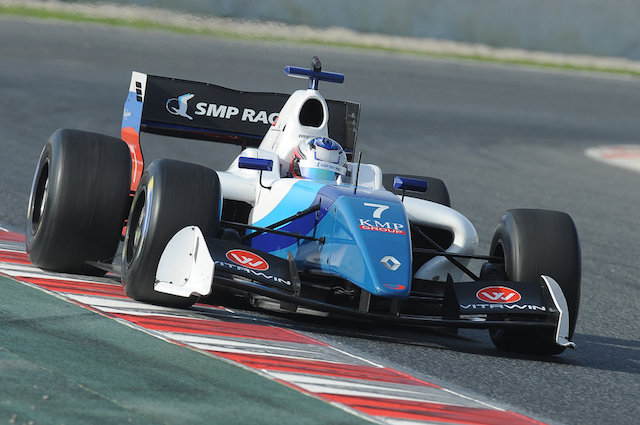 Egor Orudzhev?won with a flying start from fifth on the grid for the third time in four Formula V8 3.5 races as?Louis Deletraz beat polesitter?Tom Dillmann to stretch his points lead into the final race at Barcelona.

As in the second races at Monza and Jerez, Orudzhev got it hooked up off the line and carved his way?into the lead by the first corner, passing Dillmann on the inside.

The Russian just pulled away after that, finishing up nearly 10?seconds clear as he celebrated his fifth victory of the season, one that promotes him from sixth to third in the standings with a race to go.

In the title fight, Dillmann got the upper hand over Deletraz in qualifying by putting his AVF car on pole, seemingly over the pace issues he suffered at the previous two rounds.

Deletraz qualified fourth, although he gained a place relative to his rival when third-place qualifier?Jack Aitken?stalled and triggered an aborted start.

He then passed?Matthieu Vaxiviere into Turn 1?on lap five, and soon began to hassle Dillmann, frequently forcing the Frenchman to defend into the first corner..

His chance to get by eventually came in the final quarter of the 40-minute race, when Dillmann locked up trying to defend at the end of the straight and went straight on.

He rejoined the track just ahead of Deletraz, but the Swiss racer used his momentum to slide past into Turn 3.

Instead of the rivals being tied on points into Sunday’s finale, that pass extends Deletraz’s existing advantage from three to six points.

Orudzhev was one of four other drivers who came into the weekend with a mathematical chance of the title, but all are now over 25 points behind Deletraz.

Vaxiviere had a torrid race, evidently struggling with his SMP Racing-entered car and being shuffled back to the bottom of the top 10 before eventually choosing to pit.

Aurelien Panis?took fourth ahead of Vaxiviere’s team-mate?Matevos Isaakyan and?Vitor Baptista, who scored his third top-six finish of the year 12 months on from claiming the Euroformula Open title in Barcelona.