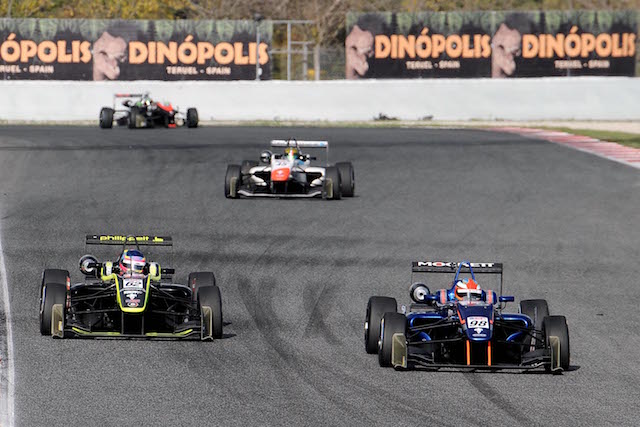 In the opening race, Habsburg made a better start than polesitter Herta to claim the initiative on the inside at Turn 1. Herta tried to hang on around the outside, found himself forced off track and then cut the inside of Turn 2 at speed to rejoin in the lead.

Within a few laps, race control demanded that Herta hand the lead over to Habsburg, but with the Austrian under attack from Teo Martin Motorsport debutant?Dorian Boccolacci, this was no easy task.

Herta was?gradually backing?off to try and allow Habsburg to pass him, but the Drivex racer ran wide at Turn 9 on lap five of 17 and Boccolacci pounced to take second.

The Frenchman then caught Herta at the end of the lap and made contact on the approach to the chicane that turned the American around.

With stewards choosing to leave it until after the race to investigate the clash, Boccolacci led until the chequered flag, under increasing pressure from Habsburg and a recovering Herta near the end.

It was later determined that Boccolacci had?caused the collision with Herta and he was given a five-second penalty that dropped him to third, with Habsburg inheriting the win and Herta second.

Champion?Leonardo Pulcini tangled with team-mate?Diego Menchaca on the opening lap, with the pair forced to pit with?front wing and tyre damage respectively.

Pulcini made a fantastic start to race two from third on the grid to grab the lead around the outside of Habsburg at the first corner, with Herta following him past at Turn 2.

The Italian mysteriously lost his lead on lap four though, dropping third to third in an incident unseen by the cameras.

He quickly recovered and made it a three-way fight for the win, but Herta was able to hold on out front and get his fourth win of the season, six tenths ahead of championship runner-up Habsburg.

Pulcini finished up fourth seconds back in third, with Boccolacci fourth ahead of?Antoni Ptak and?Menchaca.