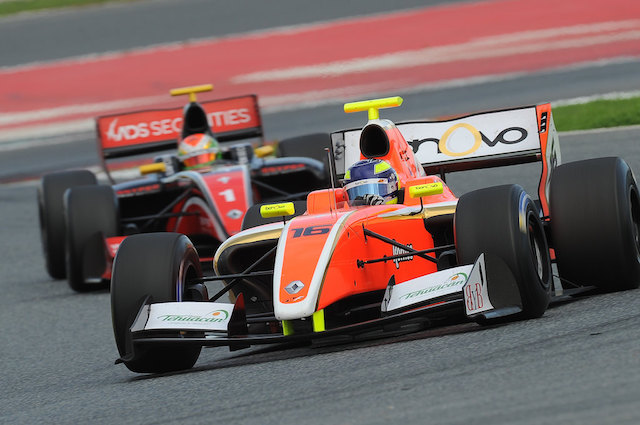 Tom Dillmann?snatched the Formula V8 3.5 title from the clutches of?Louis Deletraz with an unlikely victory in the final race of the season at Barcelona.

Having passed Dillmann in Saturday’s opener to extend his margin to six points, Deletraz then qualified on pole position on Sunday morning with Dillmann down in seventh place.

The Renault Sport Academy driver lost that advantage at the start however, shuffled back to fourth place with Dillmann just one place behind.

Deletraz just needed to stay ahead of his rival, but the mandatory pitstops presented Dillmann with the chance to get ahead and he pitted early, with just 10 of the 40 minutes elapsed.

Fortec serviced Deletraz just one lap later, but it wasn’t an ideal pitstop and he rejoined behind Dillmann.

Things got worse for Deletraz when team-mate?Pietro Fittipaldi, who jumped him at the start, rejoined from his pitstop soon afterwards inbetween the two title combatants.

Dillmann and Deletraz were now on course for fourth and fifth respectively, which would leave them level on points but series rookie Deletraz as the champion courtesy of his greater number of wins.

Single-seater veteran Dillmann was to get a decisive helping hand up the road, however.

Matevos Isaakyan had taken the lead at the start from alongside Deletraz on the front row, pursued by fourth-place qualifier?Roy Nissany.

Going after his second win in consecutive weekends, Isaakyan was being chased by the Israeli when he got held up by?backmarker?Giuseppe Cipriani, who had already had a slow pitstop.

Isaakyan reacted by diving to the pits himself, but the SMP Racing youngster was delayed by a slow tyre change on the rear-right corner, and he rejoined behind Deletraz.

Nissany continued on track but he could not immediately get by Cipriani either. He pitted next time around, and although his stop from the Charouz crew running his Lotus entry was seamless, he exited the pits behind Dillmann.

This meant the Frenchman led once all the pitstops played out – a position?that would give him the title regardless of where Deletraz finished.

Nissany cut the gap in the closing stages but could not stop Dillmann from taking victory – just his second of the year – and with it the championship.

In third, Fittipaldi finished on the podium for the first time, with Deletraz having to settle for fourth.

Isaakyan took fifth in front?Rene Binder?and?Egor Orudzhev, who couldn’t repeat his race one victory after stalling and causing an aborted start. He still held onto?third in the standings, however,

Jack Aitken completed a record of qualifying on the front two rows with third on the grid, but went off at the first corner and got mired in traffic, finishing ninth between the Teo Martin-run cars of?Beitske Visser and Yu Kanamaru.

Aurelien Panis and?Alfonso Celis finished 12th and 13th behind?Tom Randle after tangling at the start of lap two, with Panis earning a penalty.