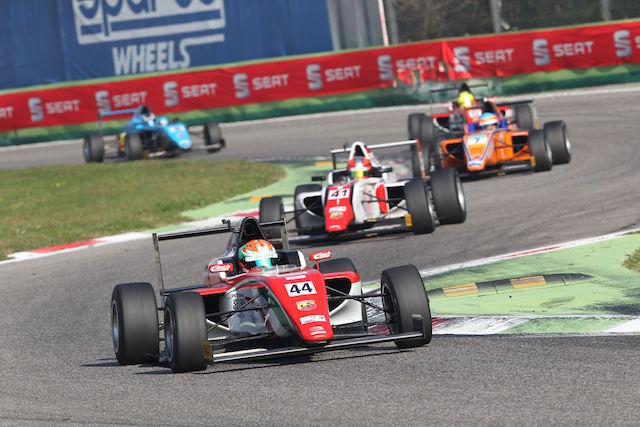 Marino Sato started from pole?but was beaten into the first chicane by the faster-starting?Yifei Ye.

Fresh from wrapping up the title in race two,?Marcos Siebert moved into third place at the start of the second lap past Leonardo Hoogenboom, but he was immediately spun around at the first chicane?by?Diego Bertonelli, who was out of control after banging wheels with Hoogenboom under braking.

This promoted Vips into third, and within three laps he had taken the lead away from Ye into Turn 1.

Ye and Sato ran nose-to-tail with Vips for the next?two laps until Ye pulled alongside the leader into the first chicane.

Vips kept the lead on the inside, and Sato then had a go at Ye but the pair locked wheels, forcing them both out.

This gave Vips a comfortable five-second lead over the three men he battled with for the race two win:?Raul Guzman,?Sebastian Fernandez and Schumacher, who had started from the rear after seeing his title hopes evaporate to front wing damage in the second race.

This time he showed patience as Guzman and Fernandez battled over P2, and inherited the place when the pair tripped over themselves entering the Roggia chicane.

Both cut the corner, with Schumacher driving past Fernandez and Guzman emerging ahead before then conceding to both his challengers.

Fernandez would go on to re-pass Schumacher on the final lap, but he and Guzman were both given five-second penalties for abusing track limits.

Guatemala’s?Ian Rodriguez?benefited to take his first podium ahead of?Artem Petrov, who started one place behind Schumacher on the grid.