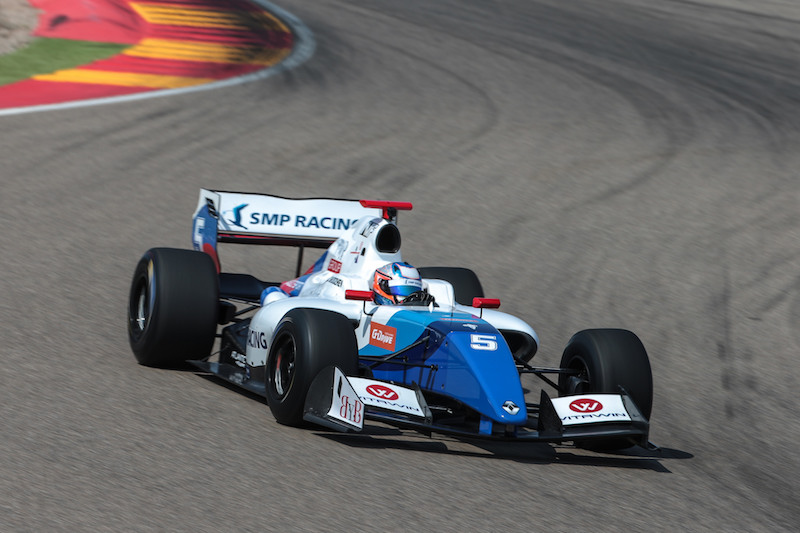 Egor Orudzhev cruised to his first?victory of the World Series Formula V8 3.5 season ahead of a tight battle for second place at Motorland Aragon.

Orudzhev?s fellow SMP-backed AVF driver Matevos Isaakyan eventually claimed the second spot on the podium, but only after a race-long fight up through the order from eighth on the grid.

From second, Orudzhev took the lead at the start after another slow getaway for Pietro Fittipaldi, who then triggered a safety car after contact and a spin a few corners later.

After the restart, Orudzhev gradually pulled a gap over second-placed Roy Nissany, and finished up 13 seconds clear of Isaakyan.

Behind Nissany and Alfonso Celis, Yu Kanamaru spent the first part of the race defending against Isaakyan, with Konstantin Tereshchenko and Rene Binder soon making it a four-way fight for fourth.

As Isaakyan attempted a move down the inside of Kanamaru, Tereshchenko saw the opportunity to try to pass the RP Motorpsort driver around the outside. The three cars ran side by sidenmmn, with Isaakyan exiting the corner ahead. Kanamaru fell back to sixth, behind Tereshchenko, and was left to battle with Binder.

By this point, the battle for fourth was more than four seconds behind Celis in third, but as soon as he was released from behind Kanamaru, Isaakyan set about closing the gap, setting fastest laps in the process.

Celis was trying to find a way past Nissany in second when Isaakyan caught up with him, and wasted no time getting past the Mexican, though a scruffy overtake almost meant the two drivers collided.

Celis stayed on Isaakyan?s tail as he tried to find a way past Nissany. In the final stages of the race, Isaakyan was able to make the move for second, but Celis couldn?t follow him past Nissany. The Fortec driver had to wait until the final corner of the final lap to snatch the final spot of the podium.

Behind them, Binder had managed to pass Kanamaru and Tereshchenko. He was actually closing in on the battle for third as he took the chequered flag, just a tenth of a second behind Nissany.

Binder extends his lead of the championship to 11 points. After his lap one retirement, Fittipaldi remains second, but now only a point ahead of Nissany.

Tereshchenko took sixth, ahead of Kanamaru, who spent the second half of the race defending against Damiano Fiorvanti and Diego Mencheca.

Giuseppe Cipriani rounded off the top 10 and was the final finisher.