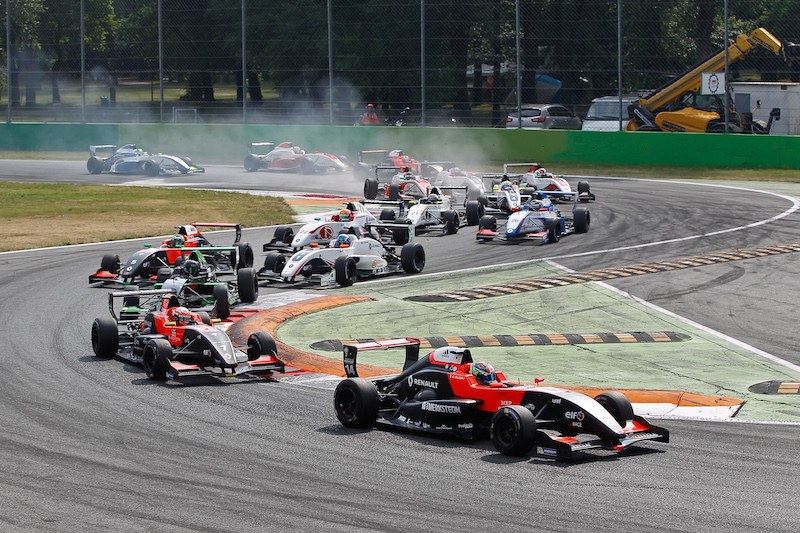 After pipping Fewtrell by 0.035 seconds in qualifying to take pole position, Aubry made a good start to retain the lead.

Fewtrell snatched the lead at Ascari five minutes into the 25-minute race, but it only took until the first corner of the next lap for Aubry to regain the advantage.

The Frenchman then held the lead until the end, through a safety car period, under pressure from the Briton, with six tenths of a second separating them at the end.

Polish privateer Bartek Mirecki marked his first race of the season against the Eurocup regulars with his maiden podium in third, a position he held from the start.

Thomas Maxwell and Charles Milesi followed Mirecki into the chicane at the start of the race but tangled on the exit, forcing both into early retirements and making Jean-Baptiste Simmenauer take avoiding action onto the grass.

Sun Yue Yang thus inherited a fourth position, and though he was then passed by Gilles Magnus,?the Chinese Renault Sport Academy driver would regain the position after the safety car and finished right on Mirecki’s tail after catching the Pole late on.

Last year’s French Formula 4 runner-up Magnus also closed in on the podium fight as he took fifth on his Formula Renault debut.

The Belgian is part of an all-rookie quartet taking on this year’s?five-round NEC with top Eurocup outfit R-ace GP along with Milesi, Michael Benyahia and Theo Coicaud.

Formula 4 South East Asia champion Presley Martono ran sixth behind Magnus and Sun early on before?he went off into the Parabolica gravel and out of the race.

Simmenauer was fighting his way back through the order when he collided with Coicaud at the second chicane and was sent upside down. He was able to get out seemingly unharmed but the incident did bring out the safety car.

While Coicaud was able to continue, Benyahia did pit and retire from just behind him under the safety car.

Coicaud took the flag in seventh but was relegated to 10th by a 20-second penalty for an “unsafe starting”, and Frank Bird was also stopped from inheriting the place by a 10s penalty for not respecting the track limits on the pit straight, which left him ninth.

That gave seventh to Julia Panikiewicz, who did make a good move on Bird at the first chicane near the end only for the Briton to repay the favour a lap later, and eighth to?Fortec debutant Chia Wing Hoong.