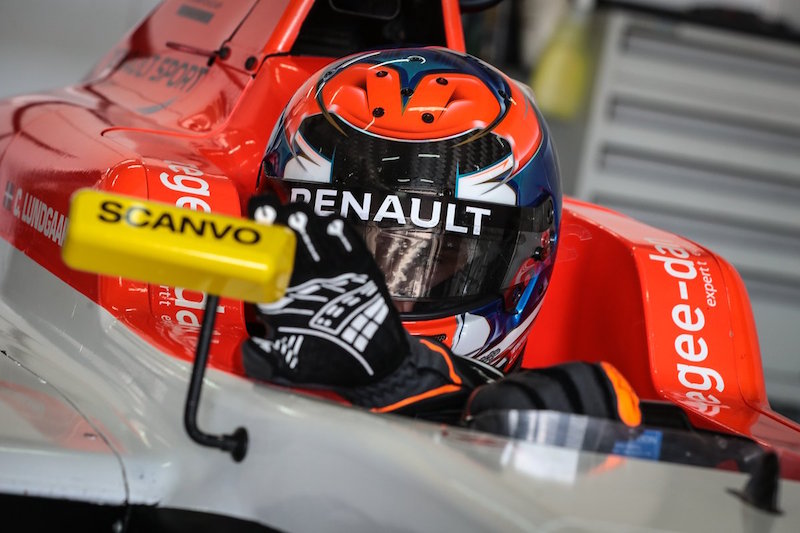 Christian Lundgaard doubled up in the second race of the opening Spanish Formula 4 round at Motorland Aragon, which was halted following a huge crash involving Alexander Smolyar.

Renault Sport Academy driver Lundgaard started third on the grid, but moved to second off the line and then grabbed the lead from Xavier Lloveras with a superb move around the outside of Turn 5.

Nikita Volegov also passed Lloveras at the hairpin before the end of the first lap, and the Spaniard was relegated to fourth by Tuomas Haapalainen at Turn 12 on lap two.

Smolyar then got a run on Lloveras through Turn 13, but when he went to switch?to the inside on the approach to Turn 14, he hit the rear of the FA Racing car.

The front of Smolyar’s car soared into the air, and after landing he clattered into the car of Haapalainen that was turning into the apex.

The incident initially triggered a safety car, but the race was then red-flagged to allow Smolyar – who lost the rear axle and wing of his car when he hit Haapalainen – to receive medical attention.

Organisers said that Smolyar was conscious after the accident, “OK” following initial medical checks, had been taken to hospital in Alcaniz for further tests and “does not feel pain anymore”.

Following a break of 20 minutes, the race restarted with a lap behind the safety car, with seven minutes and a lap remaining once racing got back underway.

Lundgaard pulled away from Volegov to win by 2.6 seconds, posting the fastest lap on the final tour.

His MP Motorsport team-mate Bent Viscaal went from sixth to third within a lap, passing both Juuso Puhakka and Ivan Berets down the back straight.