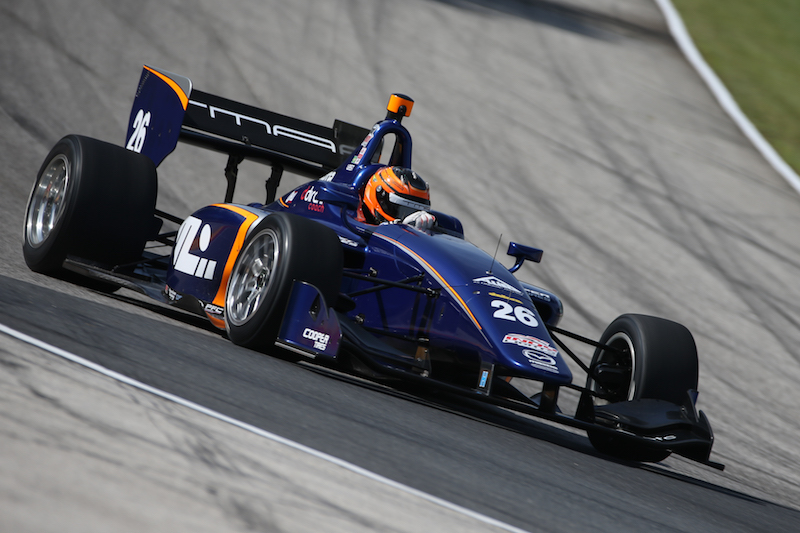 Matheus Leist took his second Indy Lights race victory in a row and his first on a road course, after a crushing performance from pole position at Road America.

Leist led from the start and remained unchallenged during the 20 lap race. He beat Santiago Urrutia by over six seconds.

Urrutia spent much of the race battling with Kyle Kaiser despite a poor first qualifying. Ryan Norman spent the first few laps of the race in this battle, but lost a lot of places after running wide at Turn 3. Urrutia made a double pass early on, passing both Kaiser and Norman.

Urrutia was able to resist championship leader Kaiser, despite a lock-up on the penultimate lap. The two were separated by less than a tenth of a second at the end.

Norman recovered to finish in fourth place, ahead of Juan Piedrahita. Nico Jamin finished sixth ahead of front row starter Neil Alberico, who clipped Norman?s car at the first turn, and damaged his front wing slightly.

Shelby Blackstock finished in eighth ahead of Dalton Kellett with Zachary Claman De Melo rounding out the top 10.

Race two polesitter Colton Herta had a difficult first race. Herta struggled to make his way past Claman De Melo and Aaron Telitz, and spun on the last lap. He?finished 12th?of the 14 runners, ahead only of Garth Rickards and Nicolas Dapero, who pulled off on the penultimate lap with an issue.