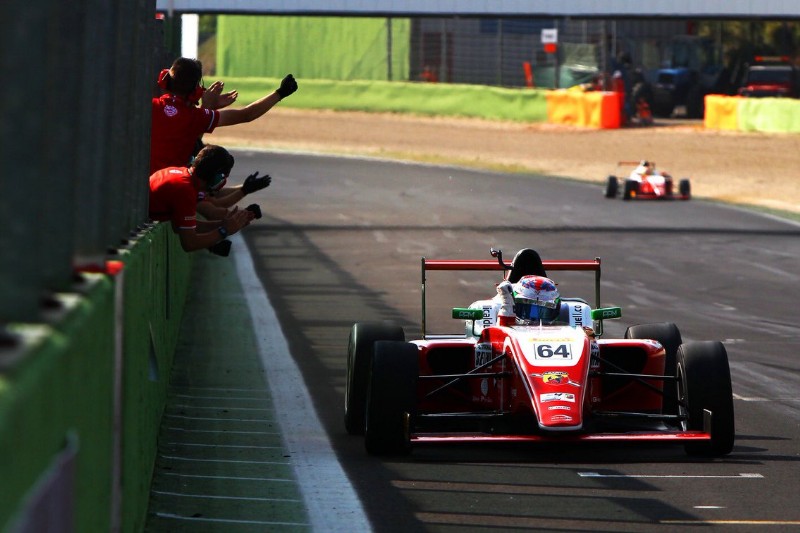 Olli Caldwell held off Petr Ptacek to become only the second driver to win all three Italian Formula 4 races in a weekend at Vallelunga.

Bhaitech driver Ptacek spent the entire race on Caldwell?s tail, trying to force a mistake from the Prema driver. Caldwell didn?t put a foot wrong though, leaving Ptacek with no opportunity to snatch the race lead.

The pair finished just 0.7 seconds apart, with Caldwell completing his triple of wins and poles, and nine seconds ahead of the rest of the field.

Ptacek’s team-mate Leonardo Lorandi extended his championship lead with his first podium of the weekend, finishing just ahead of title rival Enzo Fittipaldi. He snatched third from Fittipaldi off the line and managed to build a small gap while the Prema driver battled with team-mate Guanluca Petecof and Mucke Motorsport’s William Alatalo.

After briefly falling behind Petecof, Fittipaldi reclaimed fourth and closed the gap to Lorandi. Throughout the second half of the race he tried everything to find a way past, but Lorandi drove a perfect race to finish third, narrowly extending his slim championship lead.

Petecof took fifth ahead of Alatalo, who spent much of the race defending his position from Federico Malvestiti, Gregoire Saucy, and Alessandro Famularo. Famularo was taken out of the fight when he was handed a drive-through penalty for a jump start, but Malvestiti kept the pressure on the Mucke Motorsport driver, finishing just half a second behind.

Saucy finished eighth, ahead of Nazim Azman and Ilya Morozov.