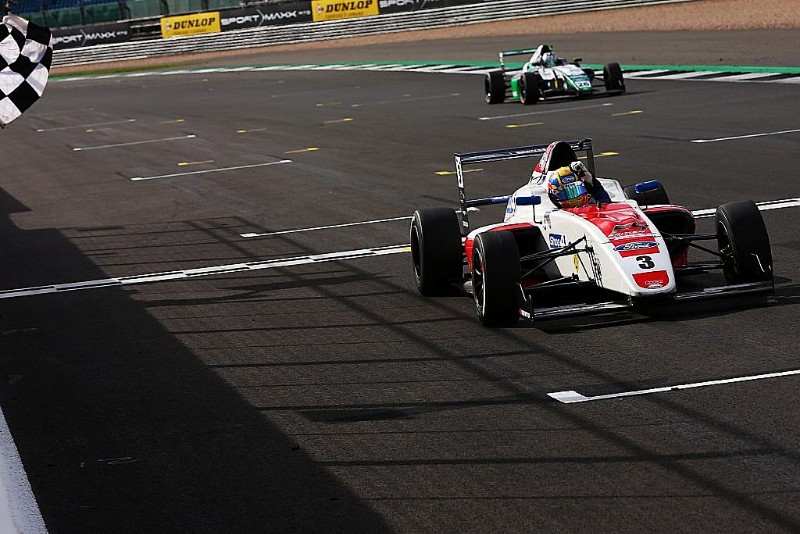 Hoggard had a car in his mirrors for the entirety of the race, starting off with Jewiss. A tap from behind by Double R Racing team-mate Paavo Tonteri meant Jack Doohan ended the first lap in second, with Simmons third and Jewiss fourth.

JHR Developments driver Simmons held off Jewiss for several laps, before a mistake at Luffield allowed Jewiss to get his nose in. Unfortunately he also got his front left wheel in, and the pair made contact. Simmons lost the place to Jewiss, and then another to Dennis Hauger through Maggotts and Becketts on the next lap despite staunch defence.

Manuel Sulaiman got alongside the two of them down the Wellington Straight, and when they went three wide at Brooklands it was Simmons who came out behind. Simmons’ race only got worse from there, going wide at Copse on the next lap and losing multiple places, then spinning at the same corner when being passed again. He decided to end his race early in the pits.

With Simmons out of the picture, Jewiss had nothing to lose and hunted down the battling pair of Hoggard and Doohan.

Doohan made it easy for him at Brooklands on lap 15 of 21, but Hoggard wasn’t going to let up the lead and in the closing laps the top four were racing nose-to-tail. Twice at Brooklands it looked like contact would be made, with the only moment of drama being when Hauger tried passing Doohan for third there on the final lap.

He didn’t pull of the pass, and finished behind Hoggard, Jewiss and Doohan. Jewiss now has a 62 point lead over Simmons in the standings, with Hauger and Doohan split by just three points in their duel for third.

Manuel Sulaiman took his second best result of the season in fifth, coming under late pressure from Arden’s Patrik Pasma. Lucca Allen crossed the line in seventh, but a 10-second penalty for jumping the start dropped him to ninth behind Sebastian Alvarez and Seb Priaulx.

The fights for the lower points places got pretty messy, with multiple grassy moments and spins. Tonteri was the taker of the final point in 10th, crossing the line with a broken front wing. Josh Skelton finished several seconds behind after incidents with Priaulx and Tonteri.

Christian Lester finished a distant last, clear of all the drama.