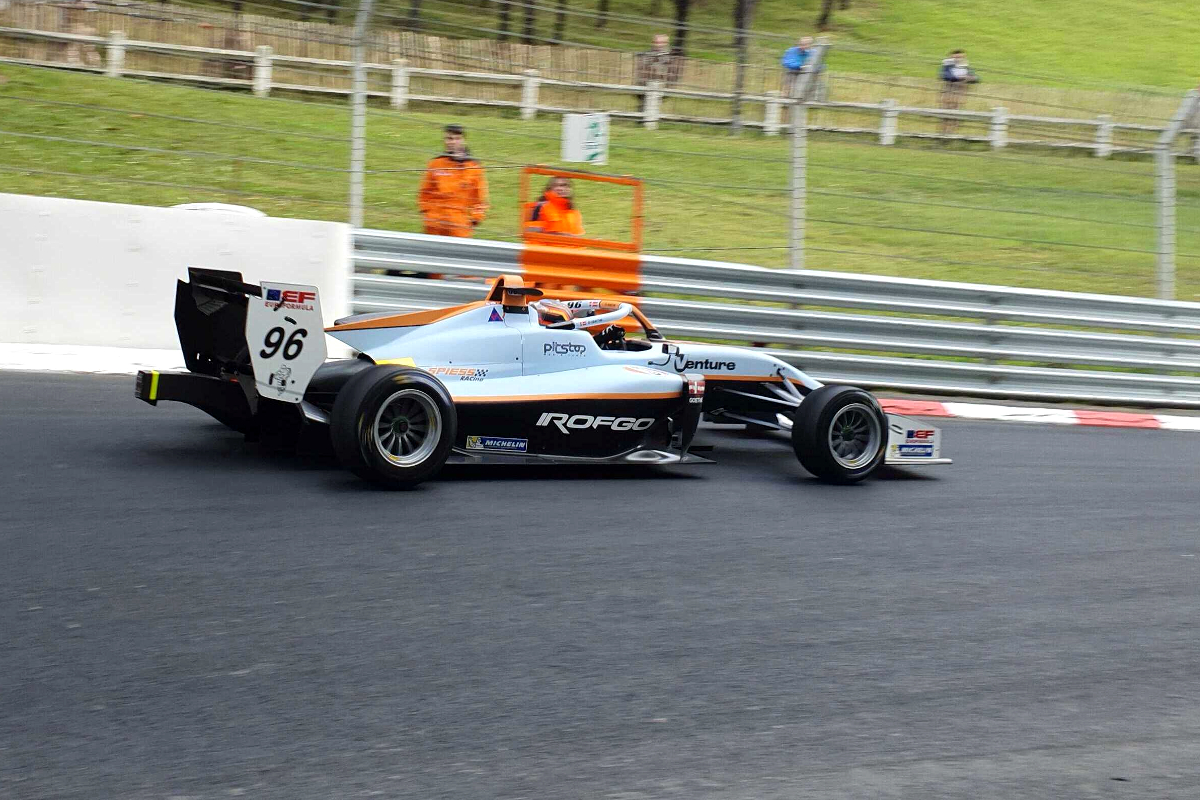 Motopark’s Oliver Goethe has continued his unbeaten run in Euroformula qualifying this year by taking pole position for the 79th edition of the Pau Grand Prix.

The Sunday morning qualifying session belonged to the fleet of cars run by Motopark, with Christian Mansell laying down the first benchmark laptime for the outfit’s Japanese offshoot CryptoTower Racing Team.

Van Amersfoort Racing’s Sebastian Ogaard briefly went fastest with a 1m11.451s lap, but Mansell then brought the pace down into the 1m10s. He improved further, and his team-mate Vlad Lomko rose to second place and just a tenth of a second behind.

It was Goethe who would end the first runs on top though, as he went out a little later and found clear track to go 0.022s faster than Mansell on the first lap at the peak of his tyres and then an incredible 1m09.994s on his second despite a lock-up at the Buisson hairpin as he pushed the limits.

The pace lowered further on the second runs, with Lomko’s first attempt at usurping Goethe getting undone by coming across Effective Racing’s debutant Vladimir Netusil in the middle of the lap.

Goethe’s team-mate Frederick Lubin had no such trouble and he went second fastest, but then overcooked his entry into turn two, locking his rear tyres and slamming into the barriers. His car was craned away with minimal disruption to proceedings, with yellow flags only out for a minute and still providing three minutes for pole to be disputed in.

Lomko was one of the first to improve after, setting a 1m09.671s that would have put him on provisional pole had Goethe not gone 0.010s faster at the same time.

Goethe’s next effort was even better, improving to 1m09.345s while Lomko’s response was 0.123s off that. They both had time for one more lap to conclude their pole battle, and Lomko bettered Goethe’s benchmark.

His 1m09.223s wasn’t good enough for pole though, as Goethe took top spot by 0.049s with the fastest lap of the weekend yet.

Mansell was 0.535s slower in third, ahead of CryptoTower’s Josh Mason – who picked up damage early on and had to undergo repairs between runs – and Drivex School’s late improver Nico Pino who was the last driver within a second of Goethe’s pace.

Filip Ugran was the top VAR driver in sixth, with Lubin seventh fastest but with a three-place grid penalty to serve for a collision he had with Pino in race two.

Netusil spent more time in the pits than his opposition and he qualified 7.360s off pole.