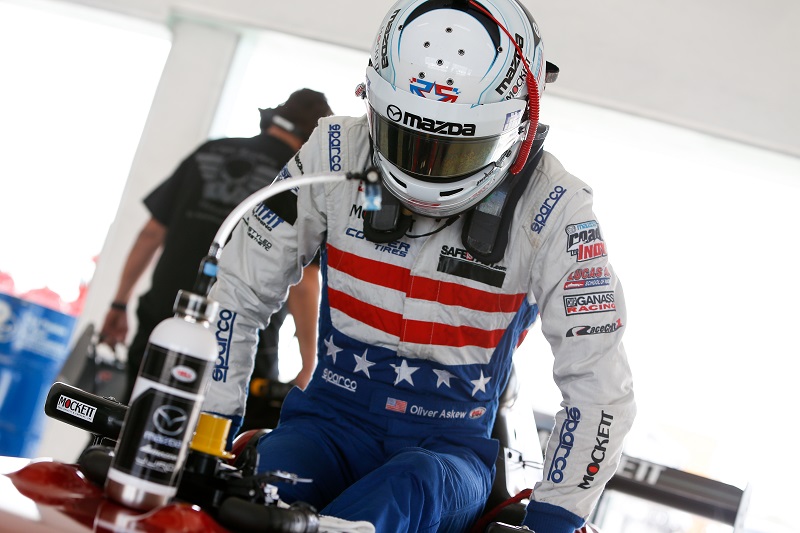 USF2000 champion Oliver Askew will continue with Cape Motorsports as he makes the step up to Pro Mazda.

The 21-year-old American won the inaugural Mazda Road to Indy Shootout in 2016, before taking the USF2000 title last year at his first attempt with Cape.

?It was a no-brainer to stay with Cape Motorsports,? said Askew.

?It was important for me to build on the relationship with them, especially after the success that we had last year.

“I was [in] the right place at the right time for being a rookie, with the new USF2000 car creating a somewhat level playing field.

“In Pro Mazda this year, it?s a similar situation.

“Where my career has gone in the past couple of years is a complete turnaround of what might have happened without Mazda Road to Indy.

“I don?t know if I would have been able to keep racing or make the step from karts to cars, so Mazda made that possible for me and many drivers beforehand.?

Askew was ninth fastest in the Pro Mazda road course test at Homestead-Miami Speedway over the weekend, during which he was battling the flu.

Keith Donegan, winner of the 2017 MRTI Shootout, has chosen ArmsUp Motorsport for his first season in USF2000.

?Obviously I have much to learn such as the cars, the tracks, the team and even the country. But I can?t wait for the challenge that lies ahead and I think we can do a really good job this year.

“ArmsUp Motorsport has a lot of experience in USF2000 and I believe that together we should be able to win races and hopefully the championship.

“Before the Shootout, I had never envisioned a way I could make a career out of racing. I?ve been dreaming of that ever since I was a kid, but the MRTI Scholarship has made that dream attainable and has relit the fire inside of me ? I?m going to grab this opportunity with both hands and give it everything I can.?

ArmsUp has had limited success in USF2000 since joining the category in 2010, although did run Victor Franzoni to third in the 2016 standings and Aaron Telitz to fourth two years prior.

Donegan was joined by Sabre Cook, a finalist for last year’s Team USA Scholarship, at the test.