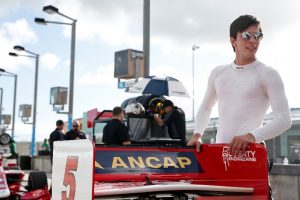 On Friday the teams used the oval, with four cars from Andretti (including Streinbrenner driver Colton Herta) and two from Juncos Racing for Pro Mazda champion Victor Franzoni and FV8 3.5 race-winner Alfonso Celis.

Norman topped the times by five hundredths of a second from Herta, exactly a year to the day since the 2016 Atlantic champion first drove on an oval.

In the final hour of the day Andretti team-mates Norman, Herta, Dalton Kellett and Patricio O’Ward ran in formation, with all four putting in laps 3mph clear of the Juncos drivers.

It was a late time that decided the order of Monday’s road course tests, with Urrutia leaping from last to first in the final minutes with a push-to-pass assisted lap that put him over four tenths clear of Norman.

O’Ward and Urrutia’s Belardi team-mate Aaron Telitz were within a tenth of Norman in third and fourth, with Franzoni, Kellett and Herta covered by a further quarter of a second.

Rain showers reduced the early afternoon running, and Celis failed to set a lap at all, meaning there was only seven cars that made it on track.

O’Ward covered the most miles on the first test day with 114 laps, with Dalton Kellett doing the same on the second with 93 laps.